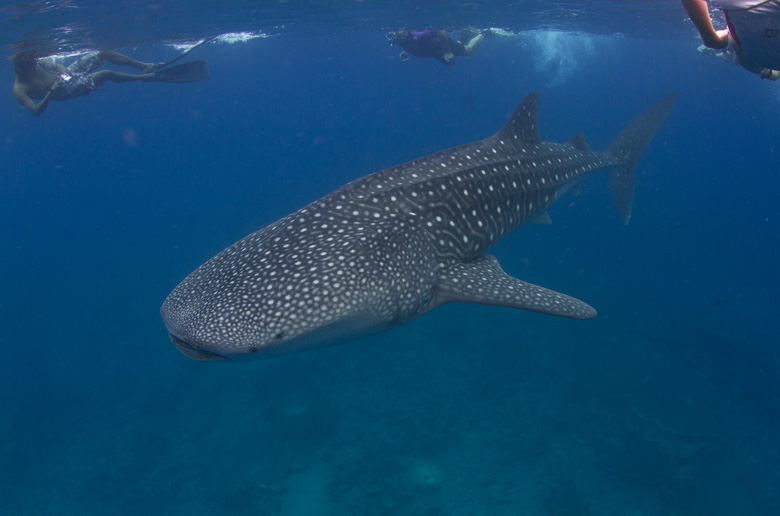 I don’t know what I expected swimming alongside a Whale Shark to remind me of, but what I didn’t expect it to remind me of was being a journalist chasing around a (tubby) politician who’s just been embroiled in a scandal, asking for comments.

You see, first the sea planes (paparazzi) put the call through to your boat (editor) advising that they’ve spotted your subject. Next follows a mad dash to get kitted up with your gear – snorkel, mask, fin, recording devices – as your boat captain (chauffeur) gets you where your subject is expected to surface. You jump into the water, dive staff (security) corral you into a line, and you’re instructed to wait. You wait. You bob. You start wondering whether you’ve been hoodwinked. And then, from out of the blue, your subject appears, drifting a slow but inexorable path in your direction. For a few moments, time hovers; you and your contingent cease jostling about and simply stare on in disbelief. The creature, your subject – (who is much larger than the photos you’d seen of them had you expecting) – drifts nonchalantly past, scarcely an arm’s length away… And then, suddenly, it’s on. The call is made and you’re allowed to give chase. GoPros stretched out in front, you and your mob break formation in a flurry of fin flaps and desperate attempt to keep pace. ‘Sir, are the allegations against you true?’ ‘Minister, any comments on the accused?’ ‘Madame Speaker, do you categorically deny all charges?’ 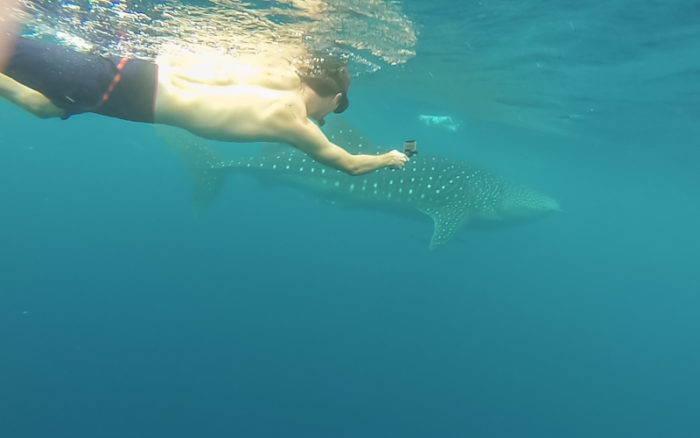 The author with his subject.

This, at least, is how things seemed to me. And so, finding myself in such company, I asked Mr. Whale Shark a few questions. Here’s what he had to say.

So, fella, tell me a bit about yourself.

Well, I was born in the Maldives but have spent most of my youth up cruising up and down the WA coastline. I’m about 6 years old and 7 metres long.

Is that about normal size for your age?

I like to think I’m a little bigger than most.

Just a hunch. So, how big do you think you’ll grow?

Hard to say. The biggest whale shark ever confirmed was 12 metres, but there are plenty of unconfirmed reports of us being 15, 18, even 21 metres long.

Yeah, we’re the world’s biggest animal that isn’t a whale.

About that, clear something up for me would you. What are you: a whale or a shark?

What’s with the whale suffix then? Is that just to make your sound more regal or something?

No, it’s because I’m the size of a whale and, like whales, I love eating plankton. Plus it’s your mob who gave me that name anyway – it’s not like I came up with it. Were it up to me I’d be going by the name the Vietnamese call me: Ca Ong.

Damn straight. And it’s certainly better than what the Taiwanese call me.

Haha! Why do they call you that?

Well, it’s a bit sad actually… supposedly the taste and texture of our flesh is a little like tofu.

What? But how would anyone know that?

Unfortunately in some Asian countries we’re considered a delicacy. If you don’t mind, I’d actually quite like to use this opportunity to ask your readership not to eat us. The International Union for Conservation of Nature and Natural Resources lists us as vulnerable. And honestly, why would you eat us anyway? We’re chill.

Sure thing. You heard the shark, people: Don’t eat Whale Shark. In fact, don’t eat any whale. Or any shark.

Also, there are a few of us in aquariums around the world. Please don’t go and visit us in these. We shouldn’t be in them. Come swim with us in our natural habitat instead. By the by, what did it set you back to come see me?

A princely sum! …Am I worth it?

Absolutely. It’s a full-day tour with all gear and a super yum lunch included, and you also gotta consider that the price factors in planes that fly out to spot you. You’re the third whale shark I’ve dived with today. Plus we’ve seen dolphins, snorkelled reefs, swam with turtles and manta rays… I accidentally scared the manta rays away because I got all excited and swam too close to them.

Yeah, you gotta be careful with manta rays. They scare easy.

You ever seen any sharks?

Do they give you grief?

Not these days. I had to be wary of them when I was a pup, but there’s not too much they could do to me now that I’m this size. Plus I’ve got pretty thick skin. The skin on my back is almost 10 cm thick. That’s the thickest skin in the entire animal kingdom.

Is it annoying having people like me dropping in on you all the time?

Nah, it’s fine. I’m only around Ningaloo/Exmouth for three months of the year – from April to June, plus even then it’s not like people are dropping in on me every day. And you’re only allowed to swim with me for a few minutes at a time anyway. For the most part I actually quite enjoy the company.

Yeah, ‘cos you guys are otherwise pretty solitary huh?

Well, over this side of the world we are. Off the Mexican Coast though there have been schools spotted of us 400-fish strong.

That doesn’t surprise me. Mexicans are generally pretty gregarious.

Have you ever swallowed anyone?

I already told you: I only eat plankton.

That doesn’t answer my question.

Fine. No, I have never swallowed anyone.

Could you swallow someone? Like, if you wanted to? If they were being really annoying, say?

No, my mouth might be big but my oesophagus isn’t. My automatic gag reflex would see them spat out quick smart.

So what do you do then if someone’s being all annoying and getting up in your gill?

You what? Blank them?

Bank them. I turn my back to them. Then, if they’re still annoying me, I just go deep. I can dive to depths of more than 1,200 metres.

Yeah ‘cos, no offence or anything, but you’re not a very fast swimmer are you? Like, I’d never call myself a particularly strong swimmer, but I can keep up with you easy.

Yeah but so are you.

Also, your eyes aren’t very big are they? Like, I wouldn’t consider myself particularly big-eyed, but our eyes are about the same size.

Mate, what is this?

Sorry, just thinking out loud. Hey, so I hear there’s this Whale Shark conservation program where swimmers can take a photo of the markings around your dorsal fin area and send it in and if it’s a whale shark that hasn’t been seen before they get to name it.

Yep, it’s called the Wildbook for Whale Sharks. You can find it at whaleshark.org

So what’s with these little fishy guys attached to your belly?

They’re called remoras. They just cling onto me for the free ride and for any scraps of mine they can salvage. 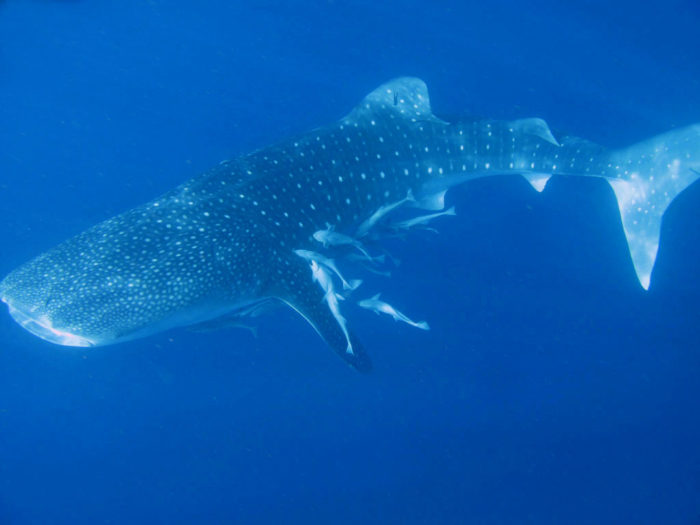 Tell me about it. You wanna know something gross about them?

They eat my poo.

…Are they what you call ‘bottom feeders’?

No, bottom feeders are… Wait, is that supposed to be a joke?

Not bad. Hey, what do you call a whale that acts of its own volition?

Thanks. I made it up myself.

Anyway, it looks like my time cruising round with you is up. Thanks for chatting to me, Lord Fish. I’ll let you get back to your plankton eating.

No worries, guy. You take care. 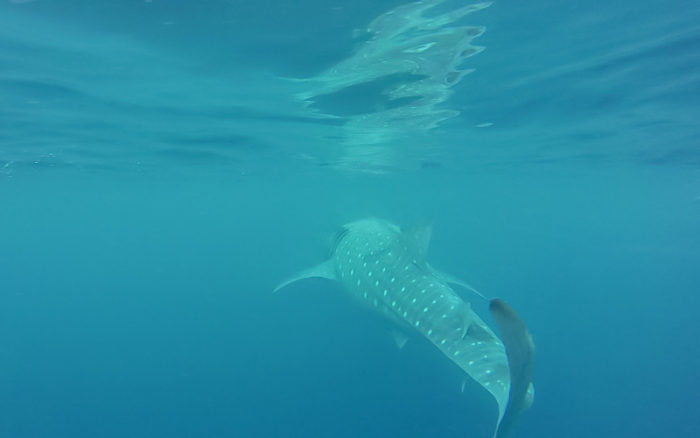 Want to swim with whale sharks? Check out our small group trips off the coast of WA. 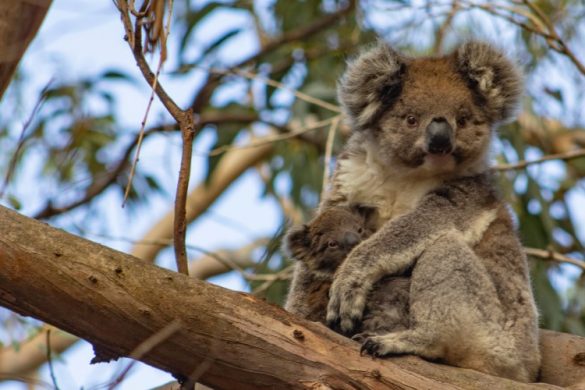