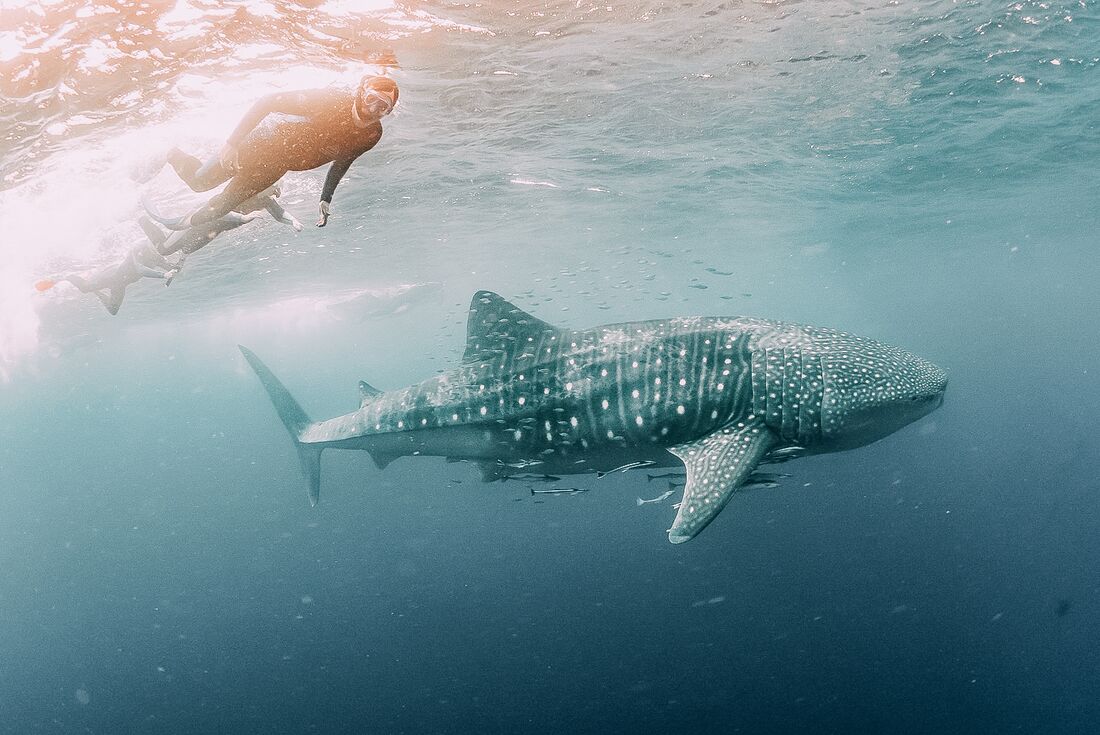 UPDATED: This blog was originally published on May 1, 2015.

Exmouth is a cruisy little town in Western Australia, about a two-and-a-half hour flight from Perth. If you find yourself here between March and August, then you should definitely head to Ningaloo Reef and go swimming with whale sharks. Not in a cage, or strapped to a scuba diving tank, or watching them through a glass-bottomed boat. We mean, actually swim alongside them with nothing but a snorkel and flippers. Curious?

Firstly, what the heck is a whale shark?

Only the biggest fish in the world! Yes, you heard right. And we let you swim with them! To be honest, whale sharks are a fairly mysterious bunch. We don’t know how long they live, where they breed, how many there are or what their migration pattern is. We do know that the average whale shark is about 12 metres long, weighs about 11 tonnes and its mouth is about 1.5 metres wide. They live in warm, tropical waters and feed on plankton, krill and anchovies (well, someone has to).

RELATED: WHY YOU MUST VISIT KANGAROO ISLAND, WHERE ANIMALS RULE

Secondly, why would I swim with one? 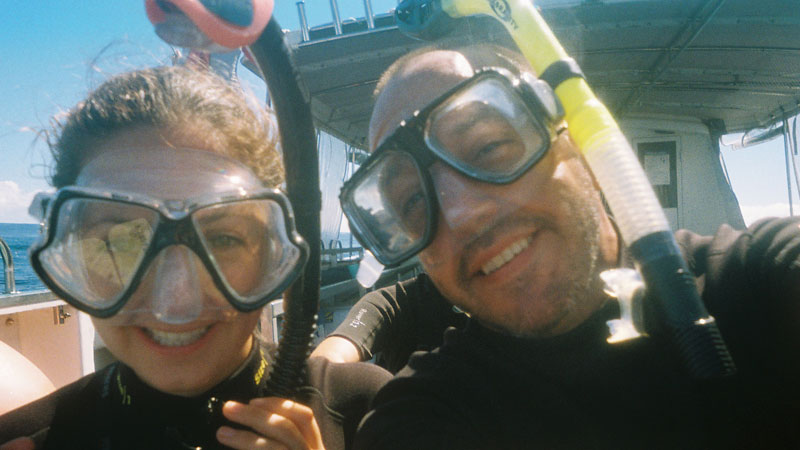 Ningaloo Reef in Exmouth is popular with whale sharks, and you are almost guaranteed a sighting if you come at the right time. They visit each year between March and July to take advantage of the spawning coral, which attracts that tasty plankton they love so much. They can dive to about 2,0000-feet but they feed at the surface so you’ll only need a mask, snorkel and fins to join them. No scuba diving equipment required, and most tour companies will accept swimmers of all abilities.

Whale sharks are known to be gentle with divers, which is why we encourage you to come and get up close to them in their natural habitat. It’s a very humbling experience, allowing you to take stock of your place in the world and marvel at ol’ Mother Nature at the same time. 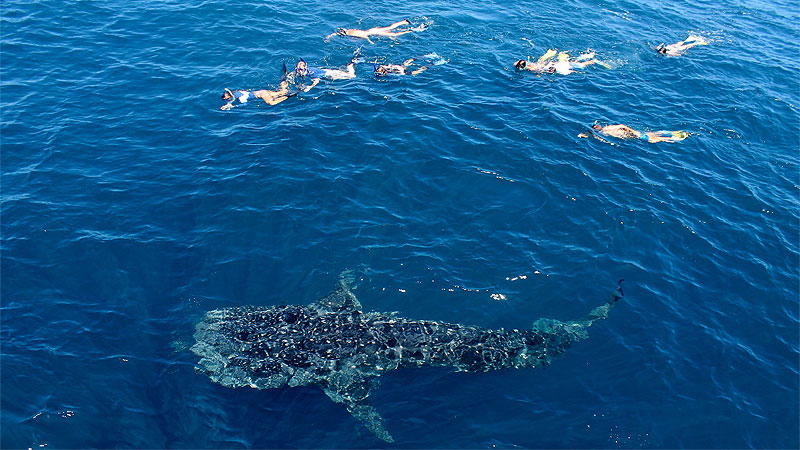 The tour operators in Ningaloo Reef are all doing their bit to help protect this mighty fish. Most have a no touch policy and aim to minimise wildlife disturbance through safe anchoring. They’re big on traveller education and whale shark interaction training.

Oh, and it’s safe for you too! Do your research before booking a tour, but they’ve all got highly trained staff who will give you the lowdown before letting you share the water with a whale shark. Some companies have doing this for over 25 years so they know what to expect. Most will have wetsuits, snorkels, fins, and flotation devices you can borrow, and they’ll be able to help you feel confident in the water regardless of your age or swimming ability.

But will they eat me?

Not a chance. Even though they have extremely wide mouths, they’re filter feeders, which means they prefer plankton and krill to humans. 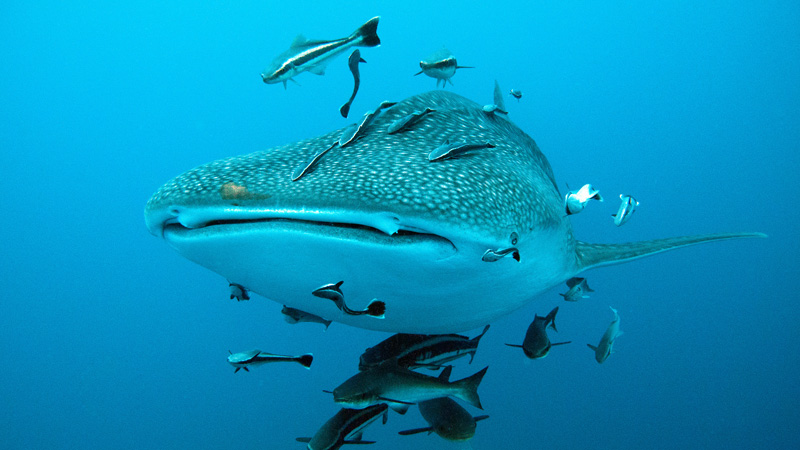 No, they won’t eat you! Photo by Rich Carey, Shutterstock

Oooh, can I swim right up to them (and maybe give them a little pat)?

That’s a hard no. There are VERY strict rules around how close you get to the whale sharks. You need to remain at least three metres away from the whale shark at all times, and at least four metres from its tail (this is also for your own safety). Never ever touch a whale shark – it can cause them undue stress and they may dive into deeper waters, thus ruining it for everybody.

We stick with the three metre rule to ensure there’s no stress to the fish, and we’re not encroaching on its natural swimming behaviour. Three metres is still super close though!

SWIM WITH WHALE SHARKS ON THESE SMALL GROUP ADVENTURES

Is there a chance to see other marine life? 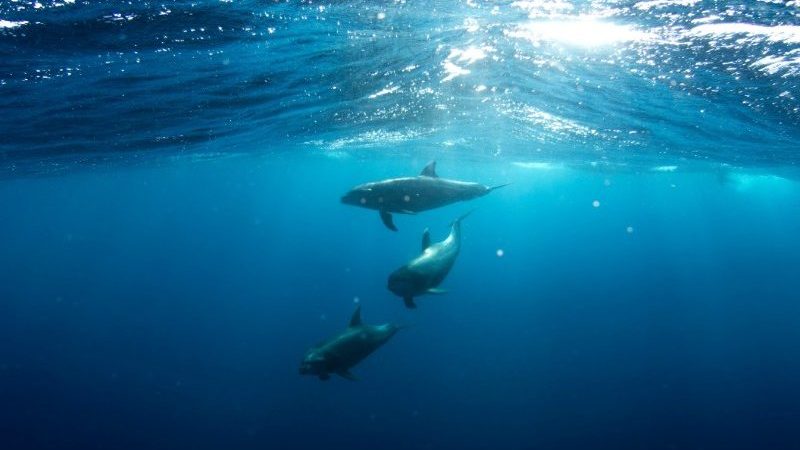 What if I get seasick?

Trust me, this is one time you are going to want to suck it up. You’ll be encouraged to jump in the water at every opportunity, no matter how rough you’re feeling. These guys want to make sure you get the most out of your experience, and it’s also amazing how quickly you recover once you hit that refreshing water.

Try to avoid looking through cameras and binoculars too much, and focus on the horizon instead. Sip water (don’t gulp, you are not a whale shark) and try to keep your body temp down. Avoid holing up in your cabin, as you’ll only feel worse being stuck in a warm, confined space.

Any interesting myths or legends around these big fellas?

Funny you should ask. There’s a lovely Kenyan legend that says soon after creating the whale shark, God and his angels wanted to honour its beauty so they showered it with silver coins, which became the shimmering spots on its body.

What else should I know?

Sadly, the World Wildlife Fund lists whale sharks as “vulnerable to extinction”. Thankfully there are some awesome conservation groups who are doing their bit to learn more about their life and behaviour. One of these is Ecocean, a not-for-profit organisation who adapted a software program from NASA to help them identify whale sharks based on their unique spots. You can help build their photo database by going online and submitting a clear photo of the shark you saw. Ecocean can then work out if it’s a new whale or one that has already been recorded. They’ll also keep you posted if your shark is seen again during its potential 13,000-kilometre journey across the ocean.

You can visit Exmouth on an Adventure Tours Australia trip, and swim with the sharks in your free time (and on your own dime). Check out our trips to Western Australia.