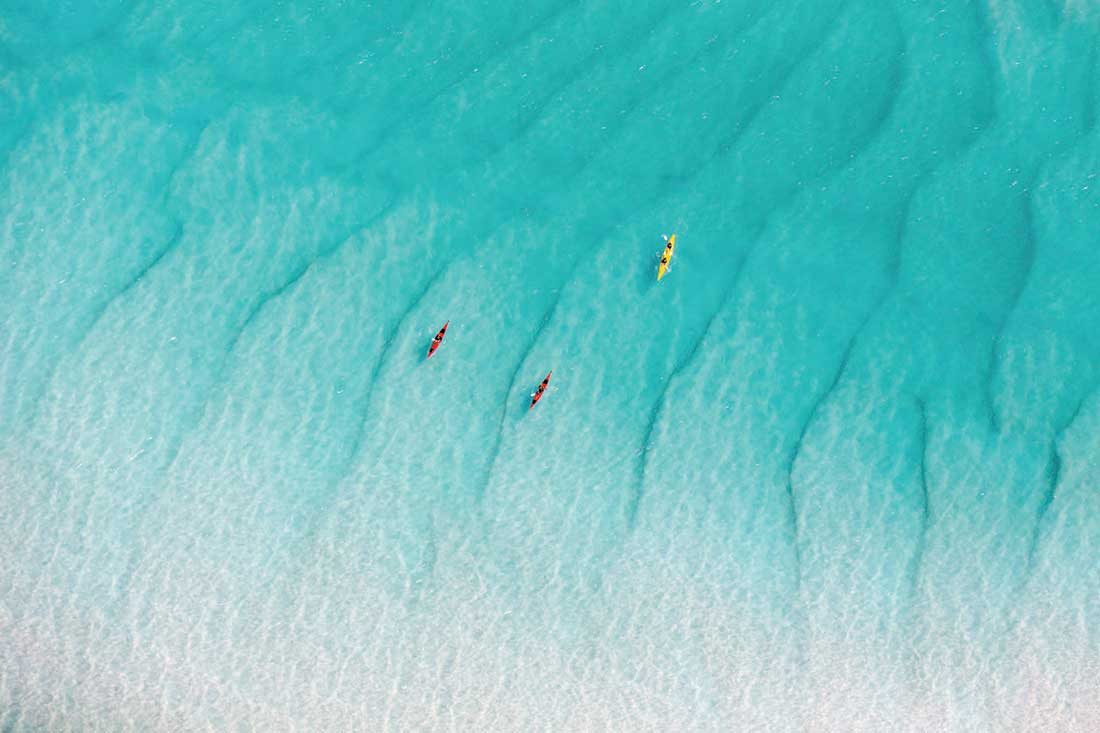 Australia is blessed with 10,685 beaches in total, and around 10,684 of them look like something out of a Leonardo DiCaprio movie. Comparing sugar-white sand and colour-matching precise shades of aquamarine is no easy task.  So how do you rank the best of the best? For one man, the job took 5 months. Ocean Care Day Founder Brad Farmer worked with a coastal studies expert from the University of Sydney to compile a list of the country’s best beaches. Each beach had to possess “authentic and compelling attributes”, whatever those are, as well as being something you’d recommend to a friend.

And the winner? Well let’s just say you won’t be roadtripping with the kids anytime soon…it’s a 4.5 flight from Perth, way out in the Indian Ocean: Cossies Beach on Cocos Keeling.

We asked our in-house experts to whittle down Brad’s list to create our definitive Top 10. Full stop. End of story. Rub some zinc on your nose and get out the cricket set…we’re going to the beach.

An excellent and underrated inclusion, hugging the eastern side of Cape Otway on Victoria’s Great Ocean Road. Unlike the forest-covered, sandstone stretch of coast near Lorne, Apollo Bay is farming country, and the sloping moss-green hills are a gorgeous backdrop to this long strip of sand…especially with a summer sunset and a big box of fish n’ chips.

Turquoise by name, turquoise by nature – this is one of the premier snorkelling beaches in Australia. It’s part of the famous Ningaloo Marine Park, and has some of the clearest waters along the Coral Coast. Good news for snorkelers too: you don’t need to be PADI-qualified to enjoy this reef. The corals start just off shore, and there’s a gentle current to carry you along.

A picture-perfect 2km stretch of pure white sand on the famous Great Keppel Island (‘GKI’ to the salty locals who call it home). Long Beach is another good example of Australia’s general approach to naming things (“It’s long…it’s a beach…I have an idea.”) Come for the aquamarine waters, obviously, but make time to check out the Indigenous shell middens on the western end of the beach.

Of all the beaches on this list, Ned’s ranks first for sheer ‘castaway’ vibes. Surrounded by black basalt ridges and kentia palms, it doesn’t feel like your typical Aussie beach. Still, if you had to be marooned somewhere, this wouldn’t be a bad choice. There’s a fringing coral reef, perfect for snorkelling, and a cliff-top walking track if you want to take in some of Lord Howe’s best views.

Tassie’s most iconic stretch of sand. Your first glimpse of Wineglass Bay is usually from the walking track lookout from Coles Bay, after you’ve crossed the isthmus. You round a corner, walk up to the edge and look down on one of the most idyllic beaches in the world. Most travellers turn back at this point (it’s a long walk), but we recommend powering on down for a chilly Tasmania dip.

Refer to photo. That is all.

Not your classically beautiful Aussie beach, but definitely one of our favourites. Cape Leveque is a special spot: 3-hours drive from Broome along corrugated dirt roads, you come to the red rocks of the Dampier Peninsula, a forgotten pocket of Western Australia with a proud Indigenous history. You can camp right near the beach at Kooljaman, a campsite run by the local Bardi Jawi people.

Pro tip: keep the bathers on. Nudey Beach has a great name, no doubt, but you’ll raise a few eyebrows if you rock up in your birthday suit. As for the location, Fitzroy is about as unspoiled as an island can be: 95% of it is National Park, and there’s only one small resort servicing the whole place. Nudey Beach is its pride and joy, and you can see why.

Cossies Beach is so pretty it almost loses points for sheer arrogance. Nowhere in the world should actually look like this, but it does. Cossies came in at #1 on the Brad Farmer list, but we’ve bumped it to #2 (you’ll see why in a moment). It’s about as perfect as a beach can be, and a great reason to see an island chain that gets next to 0 national attention: Cocos Keeling.

Queensland’s Whitehaven Beach is the picture of paradise. Who agrees? Photo by @raejmartens #gdayATA

The granddaddy of all Australian beaches, regularly topping World’s Best on numerous occasions. Of course it’s the one and only: Whitehaven Beach in the Whitsundays. When we’re having a long day at work, close our eyes and hear the hiss of waves on sand, this is what we’re picturing.

Want to check out some of Australia’s best beaches? We visit a fair few on our small group adventures.