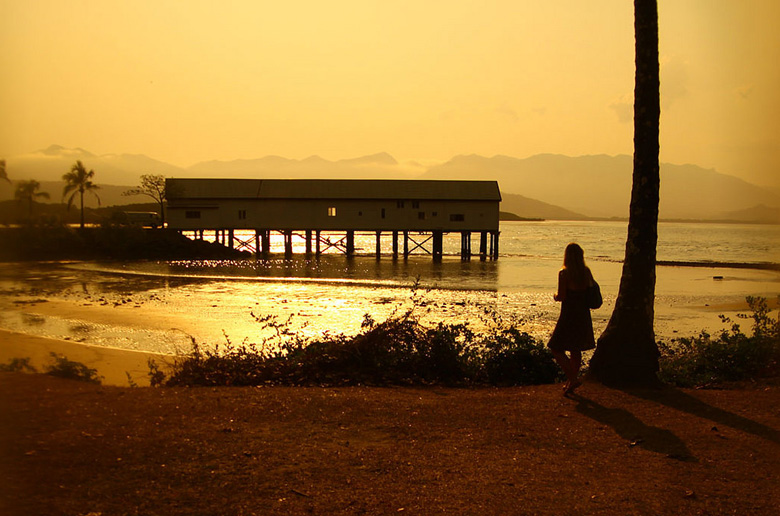 If you take your outdoor adventure warm, with high-humidity and pinch of palm-shaded paradise, do yourself a favour and book a ticket to Cairns. It’s northern Queensland’s ‘gateway’ town, and although the city itself isn’t much to write home about, it is a fantastic launching pad for The Great Barrier Reef and the northern hinterland. Golden beaches dotted with fallen coconuts, shady river gorges and swimming holes like Mossman Gorge, not to mention the world’s biggest fringe reef – they’re all within an easy day trip from the Smith’s Creek estuary.

Here’s our ultimate guide to the Cairns region, both north and south of the city.

Things to see north of Cairns:

Beaches on the way to Daintree: Machans Beach, Holloways Beach, Yorkers Knob, Trinity Beach and Palm Cove are all excellent swimming spots just north of the city. But really it’s hard to make a mistake when it comes to beaches in this part of the world. The further north you drive, generally speaking, the cleaner and most post-card-like they should get. 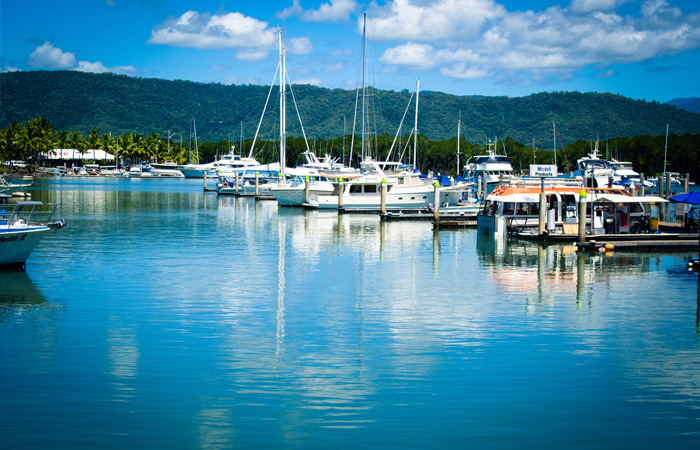 Ellis Beach and Port Douglas: A quaint little beach and small town feel (although it does swell with pasty southern tourists in the warmer months). Both are beautiful to check out, if you have the time. If you’re a young backpacker looking for a good time, Port Douglas might not be the swinging capital you’re hoping for (stick to Cairns for that, especially in the streets behind the Esplanade). Port Douglas in a shoulder or off season has a sleep feel, and of course The Daintree is just nearby. 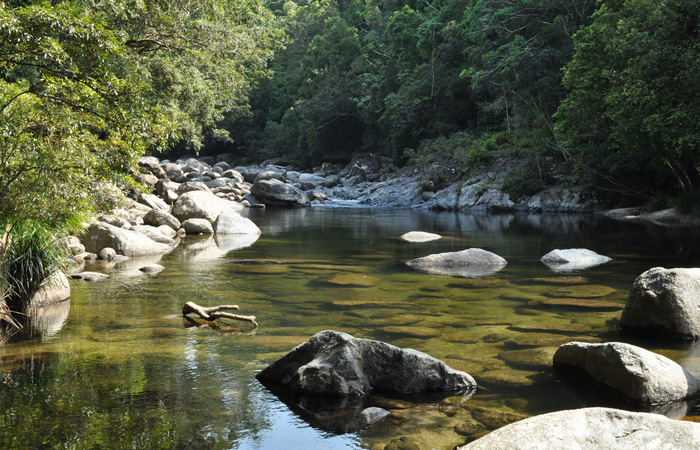 Mossman Gorge – A somewhat long walk, but don’t worry – you can catch a bus from the car park area. It’s about $9 from the Mossman Gorge Centre, which departs every 15 minutes from 8 a.m. to 5:45 p.m. If you want to walk, I suggest you go early so you’re not walking back in the dark, like me. Whoops. There are amazing lookout areas, giant rocks to climb and my personal favorite, a bouncing bridge. The waters of Mossman are heaven too: icy cold but crystal clear. Makes a great inland swimming hole in summer. 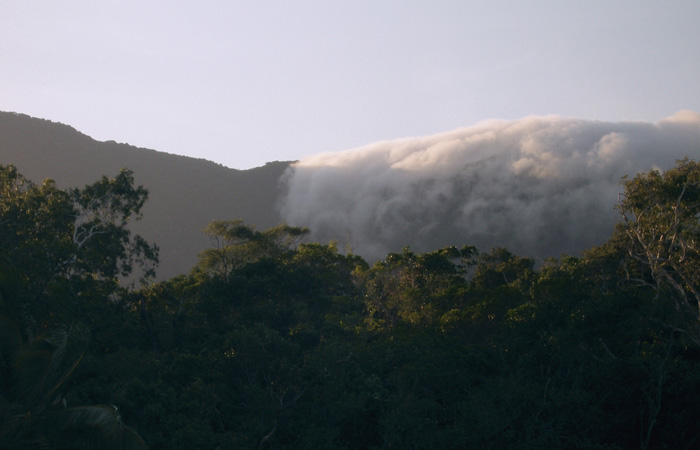 Daintree Rainforest – You enter the Daintree River area via ferry, which costs roughly $25 for a round-trip ticket in a car. The ferry isn’t optional (unless unless you want to swim with some not-so-friendly crocodiles). Within Australia’s most iconic Rainforest there are beach outlets and lookouts, including Cape Kimberly and Cow Bay. Definitely make your way to the sandy untouched beaches for some truly epic views. Swimming at certain beaches is safe, but make sure to follow signs during bluebottle season, and listen out on the radio for any shark warnings. Along the way there are many small cafes, a home-made fruit ice cream stand (can’t miss it) and primeval rainforest straight out of Jurassic Park. 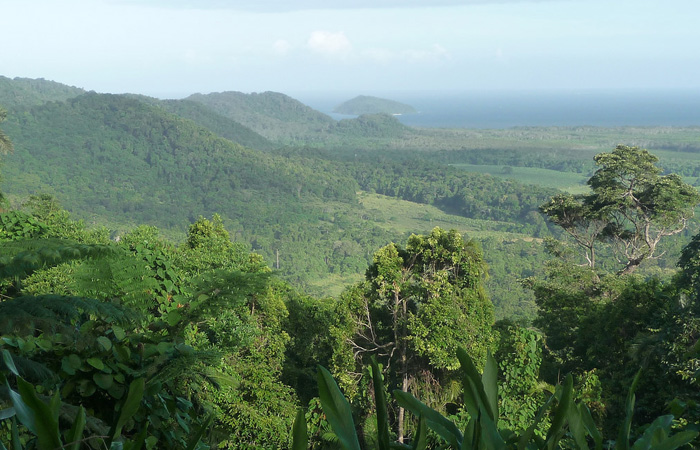 Cape Tribulation – The last stop on the road north of Cairns, and the official end of the Daintree Rainforest. It’s a must if you want to snag some amazing photos. Those looking to stay longer than a day will find plenty of campgrounds and accommodation just north of Thornton Beach, on the coast. We didn’t need a 4WD vehicle to get to Cape Trib (as the locals call it) although it never hurts. You can also see Cape Tribulation during a short day trip through the Rainforest, but make sure to check the weather beforehand. We got caught in quite the rainstorm our adventure.

Things to see south of Cairns: 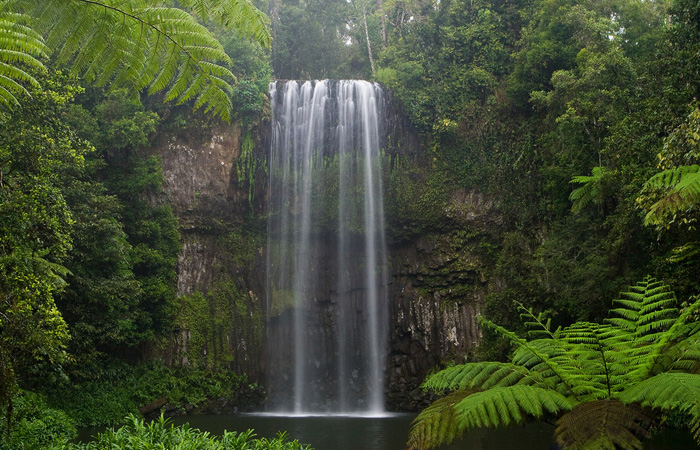 The Waterfalls – Yes, plural. And they’re incredible! Once again, the best way to see them at your own pace is to rent a car in Cairns (there are numerous car rentals in the city centre). You never know how long you’ll want to stay at each place and what else you’ll want to see along the way. There are literally dozens of falls in the forests south of Cairns, but my favourites were Barron Falls, Millaa Millaa Falls (a must – the scene of the famous ‘hair flip’ photos), Millstream Falls and Dinner Falls.

All of the waterfalls are a pretty easy stroll down from the car park areas. We were able to jump in, freeze our bums off and make it back to the heated car in a whopping 3 minutes. On that note, if you’re going to the falls you have to get in, the water isn’t that cold, I promise.

Mungali Creek Dairy Farm: If you’re a dairy fanatic and love cheese, milk, ice cream and it’s counterparts, you must check out the Mungalli Creek Dairy Farm. It’s a family-run operation on Brooks Road in Millaa Millaa. We couldn’t resist ordering a piece of freshly made cheesecake, but there’s also a walking farm that you can explore with cows and chickens to keep the kids happy,

The Great Barrier Reef – Sadly the reef is slowly diminishing, so I would definitely recommend taking a dip in one of Australia’s greatest treasures. If you haven’t been diving before, don’t fret! You can reserve a day trip with an intro diving course. Snorkeling is also a good way to go, however you may not get deep enough to see some of Cairn’s most beautiful creatures. Trips to the reef depart from the marina all the time, so finding one that suits you shouldn’t be a problem. The peak season is between June and November when the weather is more stable and visibility is good. Avoid the summer period: Queensland gets a bit monsoonal over December and January.

Whichever direction you choose, Cairns is a perfect spot to start you Queensland adventure. Check out our small group trips departing from Queensland’s gateway town.

I’m Brinkley, your typical twenty-something year old girl from California (so cliché). After college I found myself hitting the fast forward button real quick when it came to living a life that revolved around a corporate jail cell. I’m not really sure what I’m doing now as new opportunities arise each day. So if you don’t find me knee deep in some amazing noms or at the beach, I’m probably posting pictures on my website: brinkleymaine.com

I found this article to be a refreshing new style / beautifully breezy insight into some of Australia’s jewels! I look forward to visiting these places and will keep my eye out for future suggestions from Brinkley’s adventures on the trail.