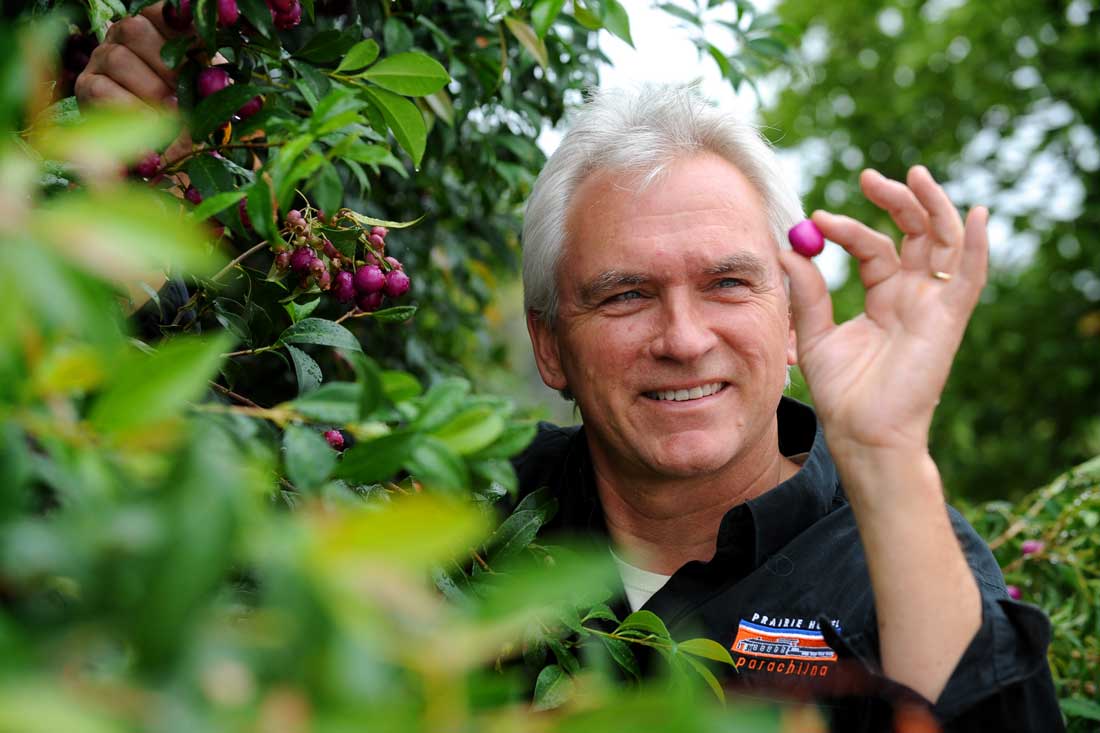 As a kid, Andrew Fielke remembers rolling marbles in the sand on the banks of the Murray River. Only the smooth orbs he played with weren’t made of glass; they were the wrinkly yet perfectly round golden pits of the quandong, a desert peach native to the area.

‘We played marbles with these beautiful round kernels. But my mum never cooked quandong jam’, recalls Andrew of his childhood in Renmark, a small country town in South Australia.

‘We never had quandong pies either. I remember when I tasted the fruit for the first time it was magnificent – wild and beautiful. I thought that we’d totally missed something growing up.’

This is one of the moments Andrew says laid the seeds for his future passion project – promoting the wealth of Australian native culinary ingredients. Something that struck him as sorely missing from his home country while he worked across Europe as a chef. 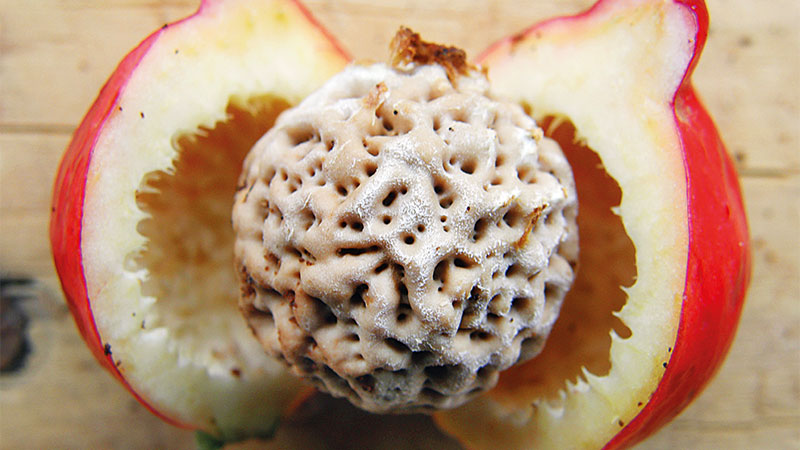 The inside of a native quandong.

‘I went straight to Europe after finishing my apprenticeship. I worked in Switzerland and Zurich for a year, and then London at the Savoy Hotel for a year, then Austria for a whole winter season. I just travelled a lot and loved how the food changed from country to country. I was always wondering why we don’t have this true Australian cuisine the same way the Europeans do.’

It wasn’t until after Andrew returned home in 1985 that his curiosity for native cuisine resurfaced. This time it was a local butcher offering him a cut of kangaroo to cook at the Adelaide restaurant he was working for at the time. The experience, and the taste, convinced him that he needed to know more.

The only problem was that appreciation of Australian ingredients back in the 80s was still in its infancy. Quandongs were relegated to farm yard bake sales, nobody knew what a muntrie was, and kangaroos were mostly considered a pest instead of a nutrient-dense source of protein. So where is a curious young chef to go?

Andrew spent years consulting with academics, historians and Indigenous communities throughout the Northern Territory to discover as much as he could about native cuisine. In the process he learned of how resourceful Aborigines had been over the last 50,000 years. For instance, leeching the toxins from poisonous plants by submerging them in running streams in order to make them edible, or protecting the easily combustible Australian bush from naked flames by building underground ovens to smoke meat. 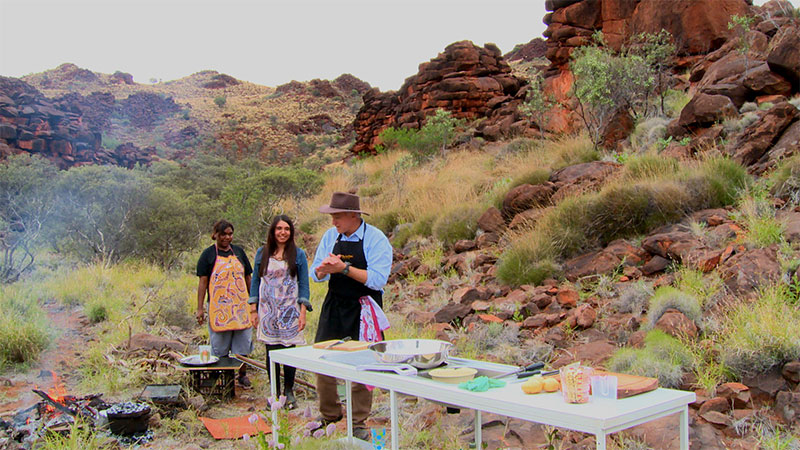 Now an award-winning chef, a respected leader in the industry and the mastermind behind Adventure Tours Australia’s exclusive tour menus, Andrew says the lack of understanding in modern Australia can be blamed on the nation’s settlement history.

‘There’s such a strong Anglo-Saxon mentality [that came with settlement]. We said we’re going to claim the land as our own because there’s no people that lay claim to land here. As soon as possible we imported sheep and rabbits, and any reliance on native foods was discarded. They called it “bush tucker” and it was such a crass way of seeing things.’

Andrew’s goal is to change the dialogue around Australian food. It’s an ambitious mission that’s supported by the renewed interest in home-grown ingredients and a culinary trend shifted towards exploring (and harvesting) your own backyard.

Not many people know that Australia has nearly 5,000 edible plant species found only in our climate. Their unique flavour profiles mean you can literally taste the true essence of the bush – a thread of eucalyptus that permeates just about everything that comes from the ground.

‘One of the best things we can do is show people where these ingredients come from. Show them the tree that quandongs actually grow on, or where wattle seeds come from. You’re not just coming to experience Australia and its beautiful sights and sounds. We’ll be engaging all the senses, and that means taste and smell.’ 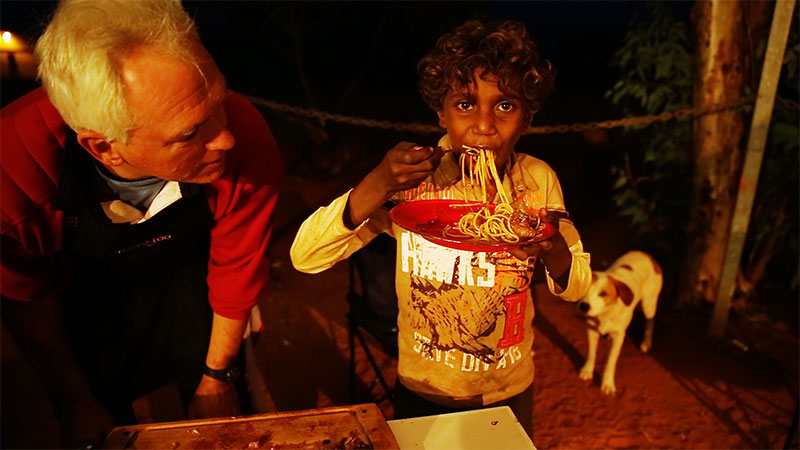 Enjoying kangaroo and spaghetti on the road.

This absolute immersion in the Australian Outback is what Andrew believes is key to understanding the Aboriginal people. It’s about building a sense of connection with the land and its inhabitants that can only be created using food.

‘With Adventure Tours Australia, we’re getting visitors to sit down and eat traditional food in a way that also engages a sixth sense – in terms of engaging with a food culture. That’s the sort of connection I’m trying to convey. When people come away from this experience I want them to talk about the food and how it has connected with their journey through this incredible land.’

Andrew Fielke is a consultant chef for Adventure Tours Australia, working to create an exclusive menu using native ingredients for all of our Red Centre and Top End trips. Experience the taste of the bush for yourself on one of our tours. 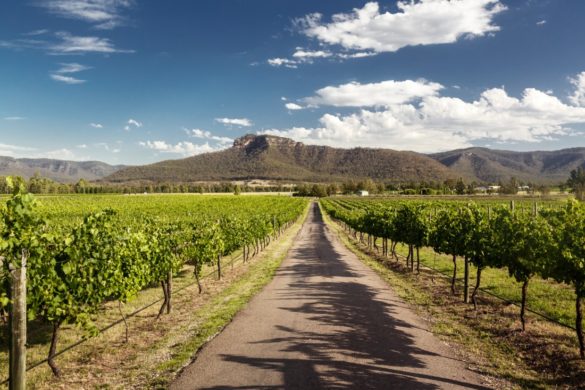 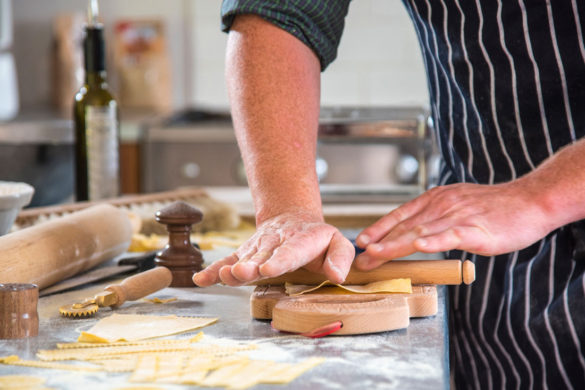