Home Guides 7 things to do in: Kakadu National Park
Guides 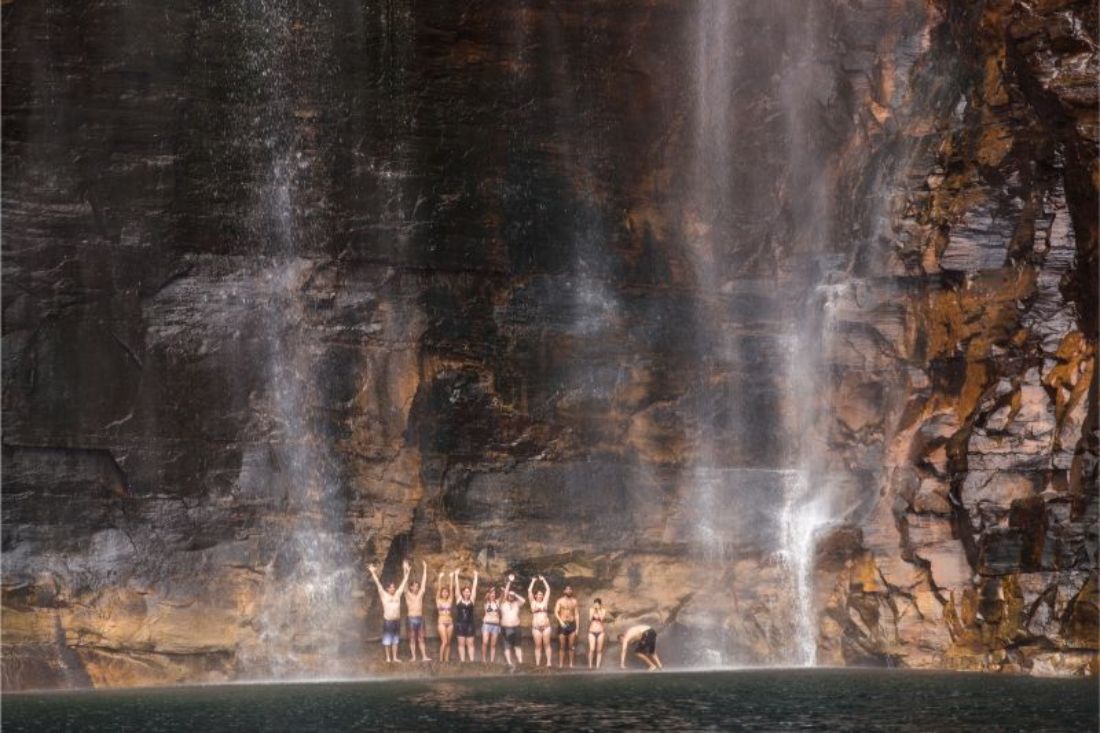 The Red Centre might be the beating heart of Australia, but Kakadu National Park is where the country goes to cool off.

It’s a 20,000 square kilometer stretch of billabongs, wetlands, gorges and rivers. You can swim here croc-free (if you know the right spots), and it makes a great detour if you’re driving the Arnhem or Kakadu Hwy from Darwin to Alice Springs. So where to begin in a region the size of Slovenia? Good question.

Here are our 7 favourite things to do in Kakadu. 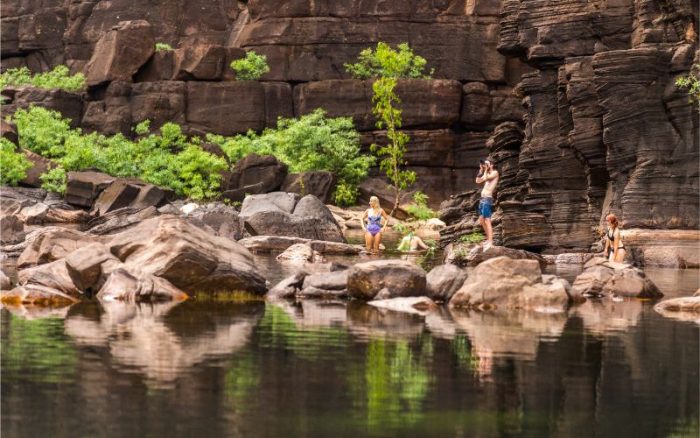 The falls so nice they named them twice (ha ha!). Jim Jim is a sheer 215m drop where the water runs year-round (although after the rainy season is when the torrent gets really wild – by June it’s dried to a steady trickle). The swim here is probably the best in the country: a deep, cool plunge pool tucked away between 150m-high cliffs.

You have to take a 4WD to reach the falls – turn off the Kakadu Highway about 43km south of the Bowali Visitors Centre. You’ll appreciate the 4WD when the road gets bumpy. 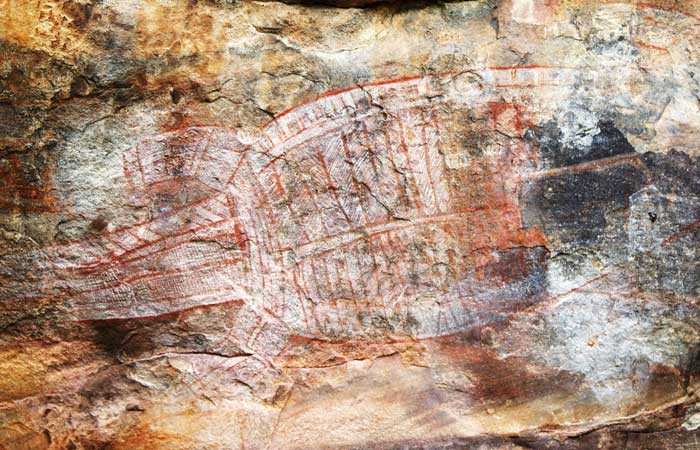 Most agree that the best country in which to see ancient rock art is Australia. And the best place to see rock art in Australia is Kakadu. And the best place rock art in Kakadu…is Ubirr. 39km north of the Arnhem Highway, at the end of a sealed road, Ubirr feels cut off from the world in time and distance. Some of the paintings here date back over 15,000 years. There are depictions of kangaroos, tortoises, Dreamtime and Creation stories from various points in history.

It gets busy in peak season (April to October), but there’s still a sense of stillness about the place. Like it’s heavy with memory.

CHECK OUT OUR RANGE OF TOP END TOURS NOW

One of the quieter rock art sites in Kakadu, Nanguluwur is at the end of a lovely little walk through the bush, just near Nourlangie Rock. It’s a moderate grade track, and you should probably allow about two hours to do it justice. Keep an eye out for the rare white-throated grass wren as you pass through the woodland: Nanguluwur is one of its few remaining habitats.

The rock art itself isn’t on the same scale as Ubirr, but there are still some amazingly preserved hand stencils and representations of Namandi spirits. Well worth a detour if you’re heading into Jabiru.

RELATED: HEADING TO DARWIN? HERE’S WHAT YOU SHOULD SEE, DO AND EAT

Apart from having a fantastic name, Anbangbang is one of Kakadu’s premier wildlife-spotting destinations. The Mary River wetlands have the Top End’s greatest concentration of water birds, but Anbangbang is a close runner up. Large-billed pelicans, magpie geese and woodland birds live close to the billabong, and the water even attracts dingoes and wallabies during the dry season.

There’s a nice walking trail around the billabong and a bunch of picnic areas to choose from if you pick up supplies in nearby Jabiru. 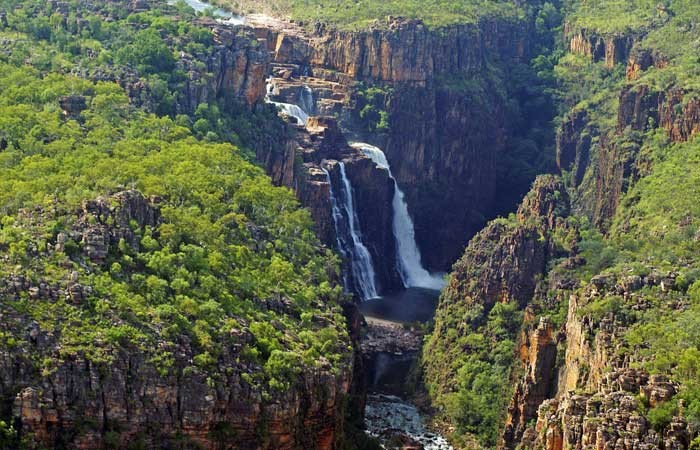 The other classic falls in Kakadu (along with Jim Jim). Twin Falls isn’t for swimming as much as it is for looking at. Crocs live in the gorge itself, and there are plenty of warning signs advising against a quick dip. So why make the trek to Twin Falls? It’s one of the most beautiful waterfalls in the country, that’s why.

Take the Plateau Walk (about 4 hours of moderate grade) and you’re rewarded with panoramic views over the falls themselves and the surrounding forest. Like Jim Jim, Twin Falls is closed in the shoulder and wet season (April to June and October), but if you go with a small group tour, your guide will know a few more secret spots you can check out nearby. 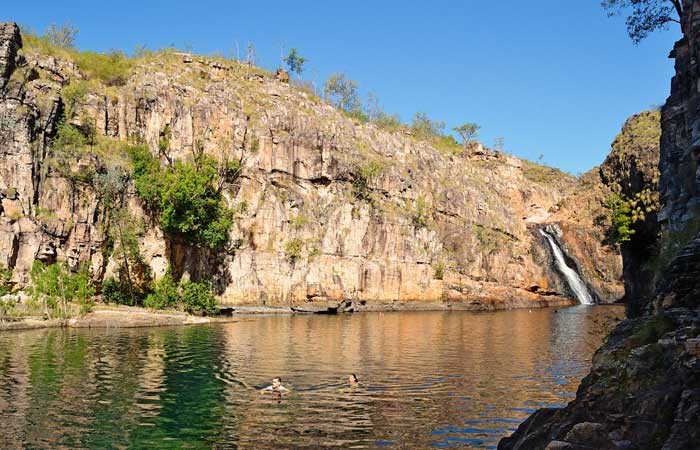 Barramundi Gorge is a bit misleading. There are no Barramundi up here in the red rock hills. If anything they should have called it ‘Excellent Swimming Gorge’ or possibly ‘Challenging Bush Walk Gorge’. Barramundi (or Maguk as it’s also known) is in the southern part of Kakadu, about 92km south of the Bowali Visitors Centre. There’s a walking track that leads you through to the swimming holes, and it passes through monsoonal forest and over some rough wooden bridges. Eventually you reach the falls, and the swimming hole at its base. Trust me, it’s well worth the toil. Pristine, inky black water and not a croc in sight. 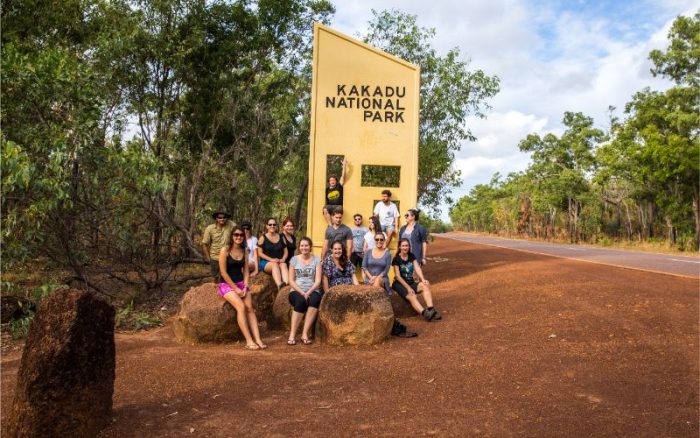 Kakadu is a good example of Parks Australia working with the traditional owners of the land. The Kakadu Board of Management was established in 1989 to look after the park, and 10 of its 15 members are of Aboriginal descent. As such, Kakadu takes its traditional culture seriously. It’s woven into the fabric of the place. And one spot you can get a hands-on feel for it is Pudakul.

You’ll be introduced to an Aboriginal guide who’ll walk you through the history of the land, the basics of bush tucker and a few tips for playing the didgeridoo. We’re proud of our connections with the Aboriginal people of Kakadu, and visiting places like Pudakul is essential for anyone visiting Kakadu.

Explore Kakadu for yourself on our 5-day Top End Adventure.