Home Features Reflections from the road: ‘No one passes through WA’
Features 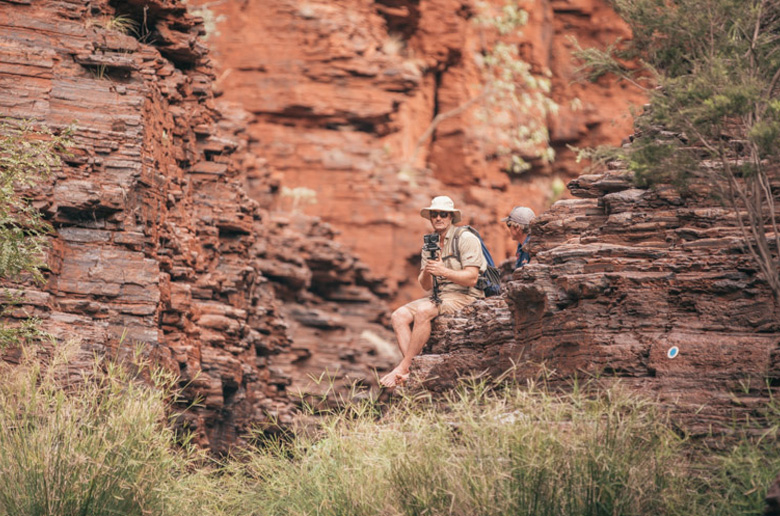 ATA trip leader Damian Thornton has been leading trips through Western Australia and the Top End for the past 4 years. On a recent overland road trip from Broome to Perth we asked him what it was about WA that he found so special.

‘Many people don’t know this but Western Australia, and especially the Pilbara and Kimberley, is one seriously old place. For a start you’ve got one of, if not the, world’s oldest continuing cultures in the Australian Indigenous people. You’ve got a people who survived here for 40, 60, some say 70,000 years. Going back much further than that, you’ve got sedimentary layers of rock in Karijini that are millions of years old. You’ve got 130 million year old dinosaur footprints long the Dampier Peninsula and in Kalbarri arthropod prints that are 420 million years old. The North Pole stromatolites, which are 3.5 billion years old, are the oldest known organisms on earth. Older than oxygen even. And then you’ve also got the zircon crystals in Jack Hills, which are the oldest found material originating on earth. They’re 4.39 billion year-old. 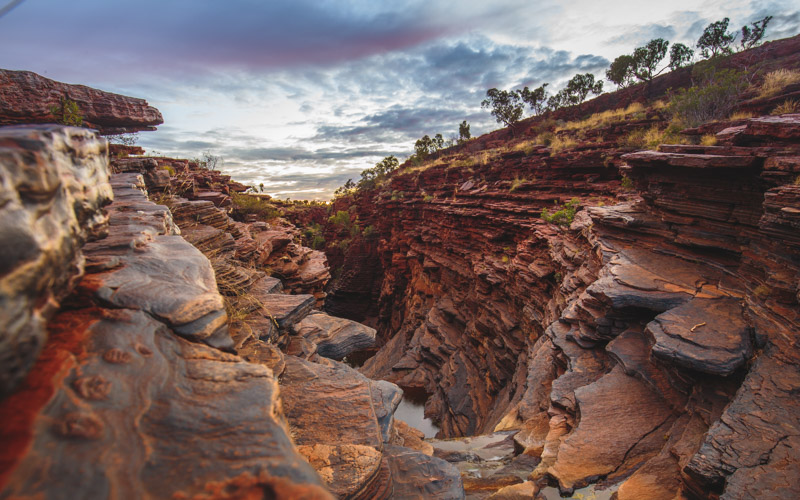 To put all this into perspective for my group, when I’m touring I often tell them to look at the landscape. WA’s pretty flat, right, but there are bluffs and rises – some of which are hundreds of metres high. These peaks, I explain to them, were once the region’s riverbeds. 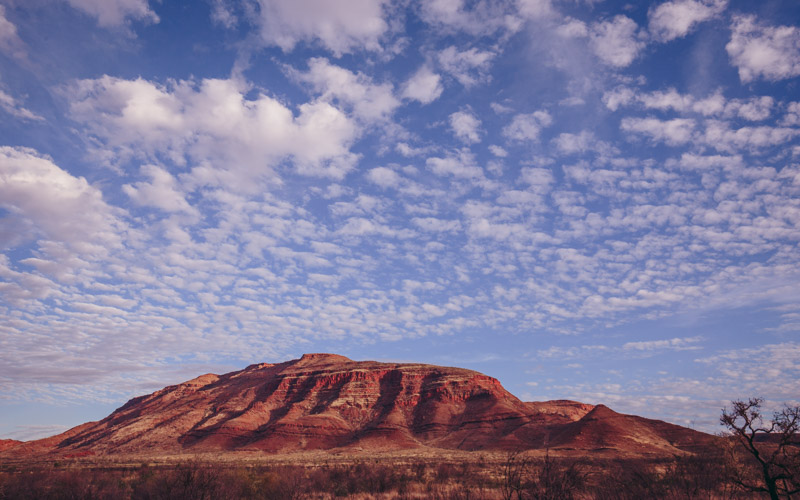 They used to be the region’s low point but, over time, the rivers dried up and the elements eroded the elevated peaks and scattered them across the terrain. So what was once at the top now lies strewn about the bottom and what was once at bottom now rests at the top. The Alps and Himalayas are young compared to WA’s mountain ranges. That’s why they’re still there.’ 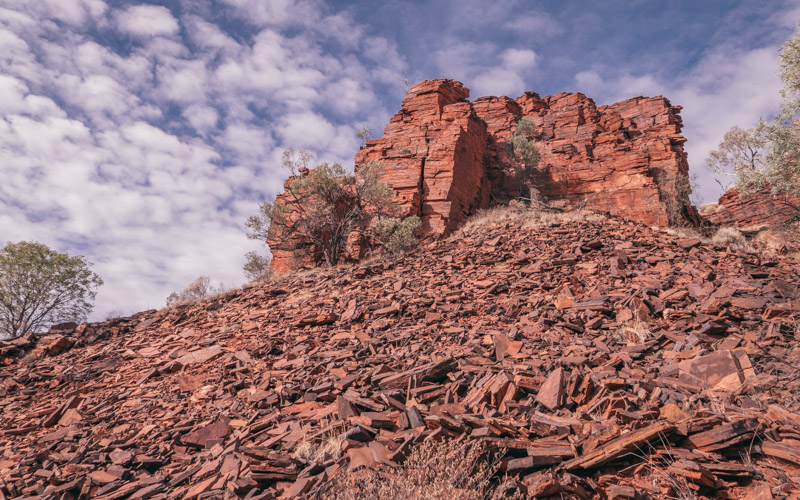 ‘I believe that Australia’s indigenous cultures should be something that we celebrate much more than we do. Travelling through regions as harsh as the Pilbara, it’s remarkable to think not only that people were able to survive here, but that they were able to for so long. And all without altering the land. It’s been calculated that 1 billion indigenous people have lived in Australia, and in all that time all those people left their environment virtually unchanged. 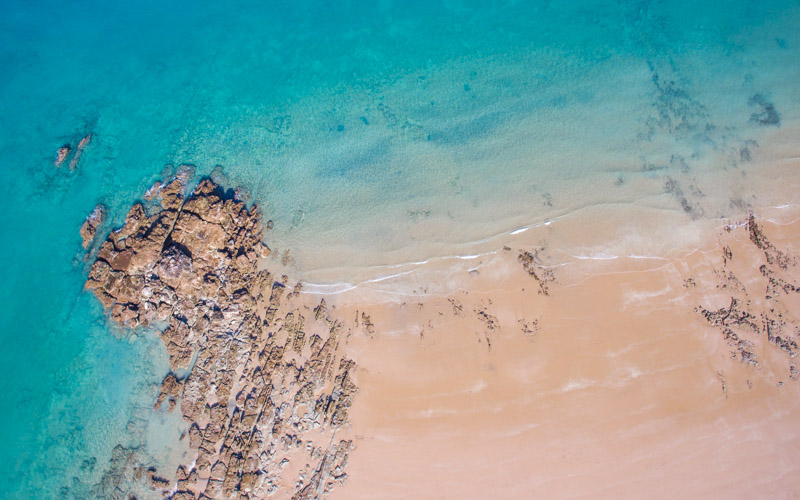 One of the things the indigenous people understood was that they had to look after the land if the land was to look after them. Some places in the Pilbara and Kimberley used to sustain thousands of people, yet now there are only hundreds there and everything has to be imported in. The soil has nutrients, there is water – or at least there was – we just don’t understand the land well enough to live off it. When Europeans first arrived here they just didn’t think there was anything worth learning and that attitude has carried on way too long’. 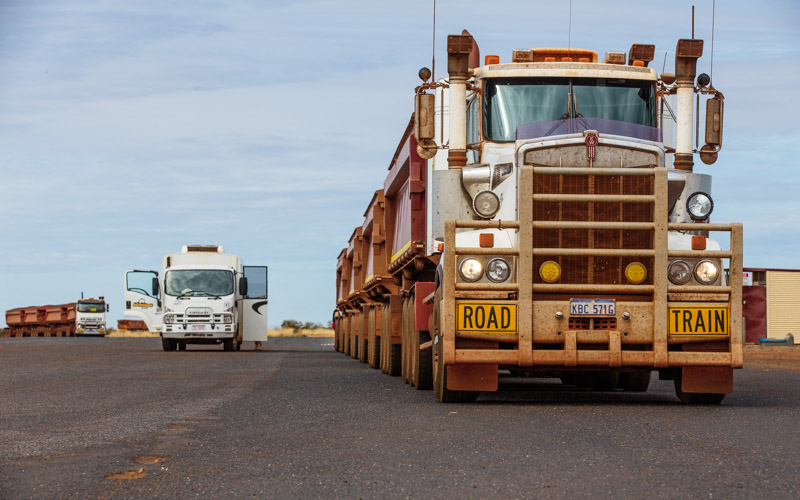 ‘I spend a lot of time driving so I spend a lot of time thinking and I can’t help but thinking at times that the ‘Western way’ of doing things is flawed. For a start, it’d be nice to know where our food comes from; to dig something out of the ground or kill the meat we eat and acknowledge that it does actually come from an animal. We grow bananas in Canarvon, transport them down to Perth, and then transport them back to Canarvon to sell on supermarket shelves. It’s crazy. Meanwhile, there’s an edible plant called the gubinge – billygoat plum – that grows from north-western WA to eastern Arnhem Land. It’s two centimetres big and has about 2,800 milligrams of vitamin C per 100 grams. An orange has 50. We’re having bigger meals with fewer nutrients. We’re increasingly connected through social media but are spending less time with actual people and disconnecting from nature. We’ve got all this technology, so should be working less, and instead we’re working more. It just doesn’t make sense.’ 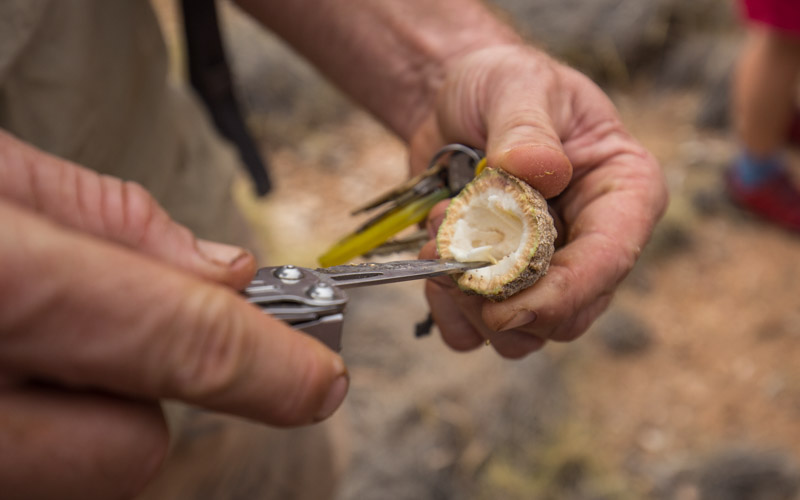 ‘The thing that always strikes me about north-western WA is that any organism you find living here – be it plant, animal or people – is just so incredibly tough. Which does kinda make sense, you know? Because to survive in any environment you need to be tougher than it and the WA environment is so harsh and unforgiving. You know, you don’t get cute little possums and lush meadows out here. You get camels and crocs and buffalos and dingoes and snakes and sharks and wedge-tailed eagles. You get chasms and desert and canyons and rugged coastlines and big fat boab trees. 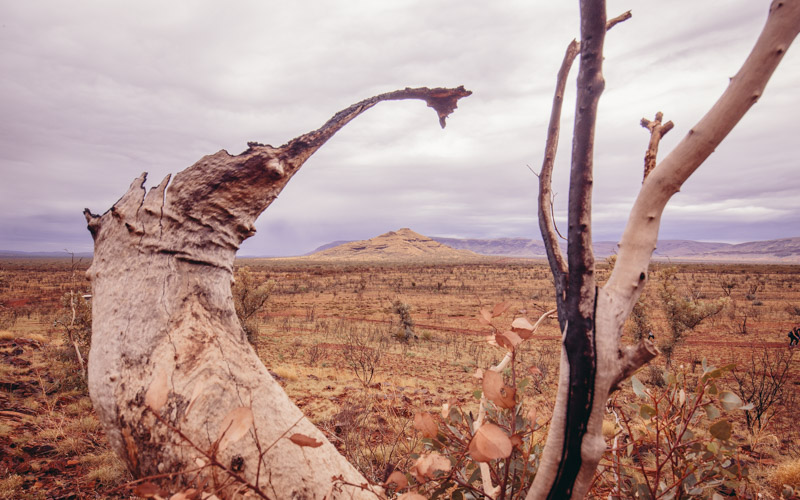 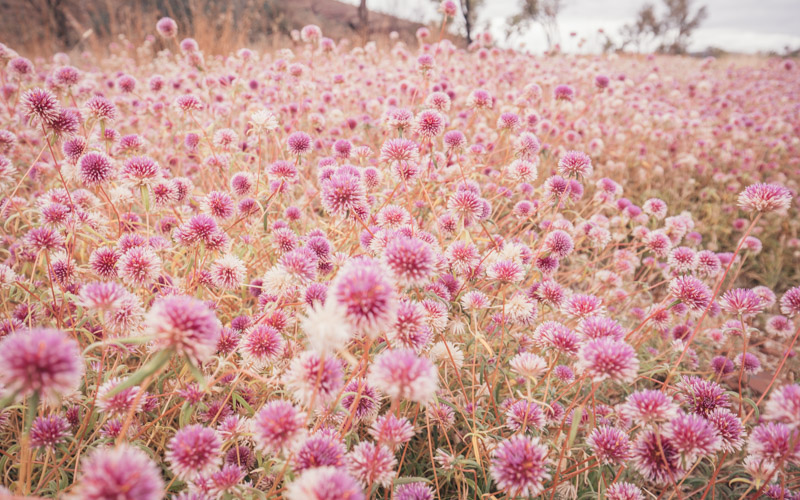 And yet, in amid all this harshness you come across little pockets of beauty. Little blooms of wildflowers. Gorgeous little swimming holes. Pristine beaches. In harshness you can find great beauty.

‘This sounds like an oxymoron, I know, but one of the things I love so much about WA is its proximity to remoteness. WA is so huge that practically every town is practically an outpost. The cities too. If WA were a country it would be the world’s 10th largest and its least densely populated. The Kimberley alone is larger than 75% of the world’s countries.’

‘The larger Australia gets, the harder I find it is you have to work to get away. Set out in any direction from Melbourne, Sydney or Brisbane and you hit a sizeable town or city pretty quick. Set out from Broome or Perth and you’re gonna be driving through nature for hours. With the exception of Port Hedland, which is really just one big mine, I don’t believe there’s a set of traffic lights between Geraldton and Katherine. That’s a distance of over 3,400 kilometres.

Some of the most special moments to be had out here, I find, are the quietest. Think, when do you normally get to experience total silence? Or total darkness? Here it’s natural. There’s just so much land and so many opportunities for discovering your own little patch of peace and quiet. Your own bit of beauty. You want to stargaze in skies with next to no light pollution? Easy. You want an entire beach to yourself? Done. Even Turquoise Bay, which has been rated one of the world’s top five beaches, you go there in the morning and there’ll only be ten people there.’ 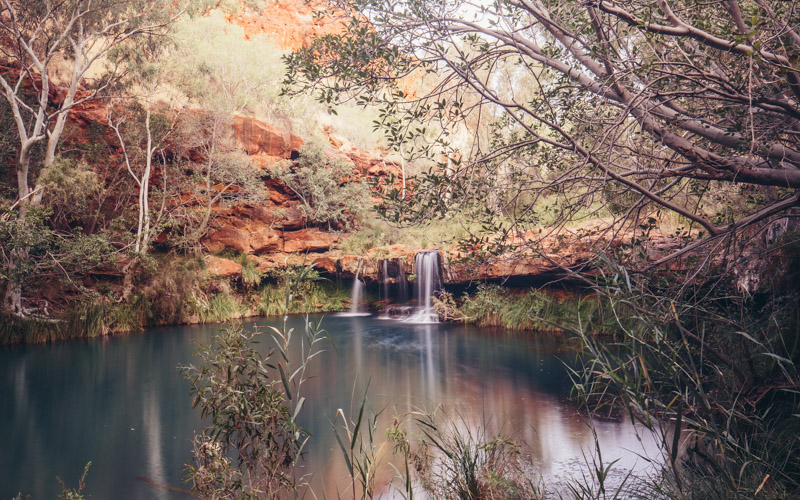 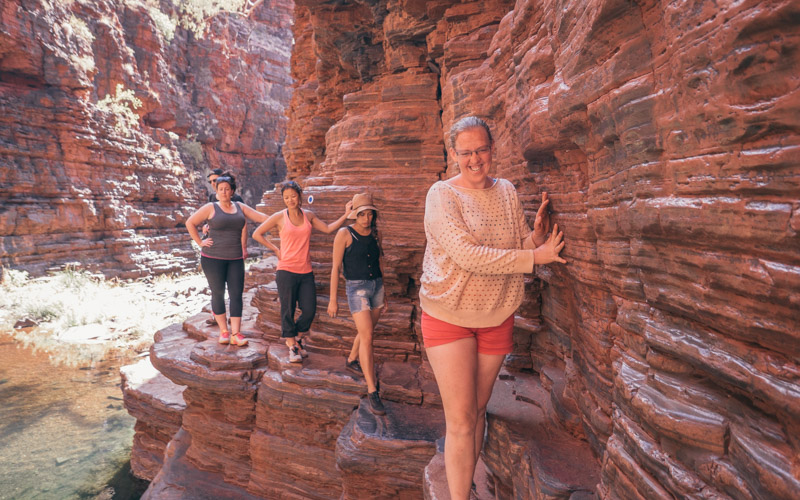 That, ultimately, I think, is why I love my job. WA attracts a certain kind of traveller. Beautiful as the east coast may be, the west coast has a different call. No one passes through WA, you know? No one stops here on the way to somewhere else, because where would you be going to? It’s not like the east coast where everyone’s gonna stopover in Byron on your way from Sydney to Brisbane. The people who travel to WA have made a conscious decision to come here. It’s their destination. They’ve come here because they’re chasing something different. It might be nature, it might be a bit of quiet, it might be solitude or it might be stromatolites. It’s my privilege to try find out what it is and make sure they experience it. 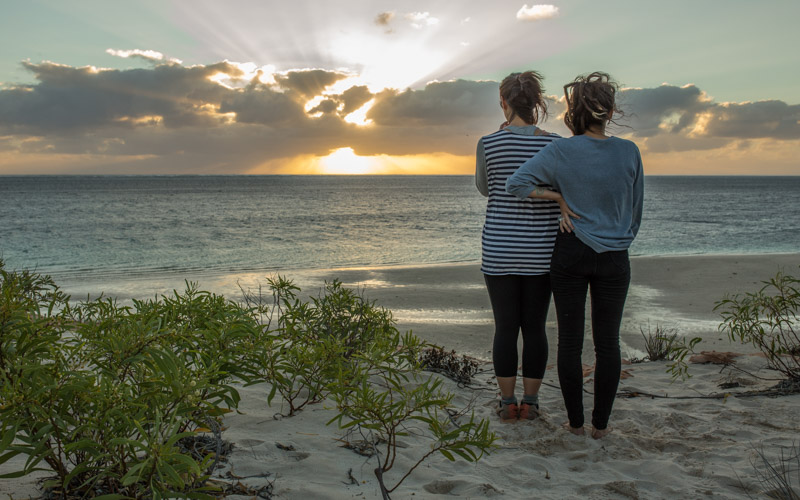 If I can take a traveller of mine to a beautiful place that they feel; if I can give them a little bit more information and help them along their way. If by talking with them about indigenous culture I maybe pass on some information that maybe makes them turn their ideas on what it is, or what the Western way is… If I can slow them down sometimes and speed them up at others. If I can, when they’re back in their normal lives, be these in Australia or overseas, and they’re sitting back at their desk or at home or wherever… If they then remember somewhere we went and are like, man, that was gorgeous, and it makes them smile, then I would be stoked. I would be legitimately stoked. It’s things like these that keep me doing what I’m doing. This is why I do what I do. This is what I love.’

Want to see WA for yourself? Check out our Broome to Perth Overland Adventure.