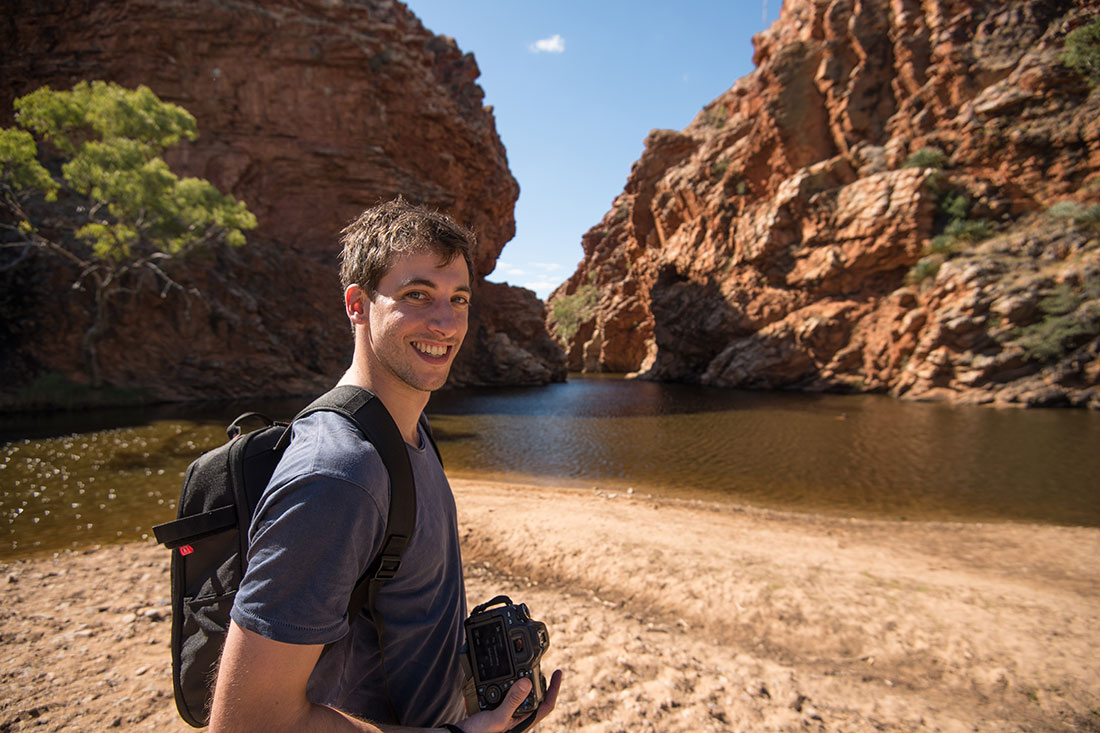 As the gateway to the Australian Outback, Alice Springs sometimes feels like little more than a stopover for travellers eager to see Uluru or Kata Tjuta (just a lazy four-hour drive down the highway). But rush past this frontier town on the edge of the MacDonnell Ranges and you’ll miss out. Set off in any direction from the town centre and it won’t be long before you wander into some spectacular, unspoiled wilderness.

Here are some easy adventures to try in the West MacDonnell Ranges, all within a two-hour drive of the town centre. 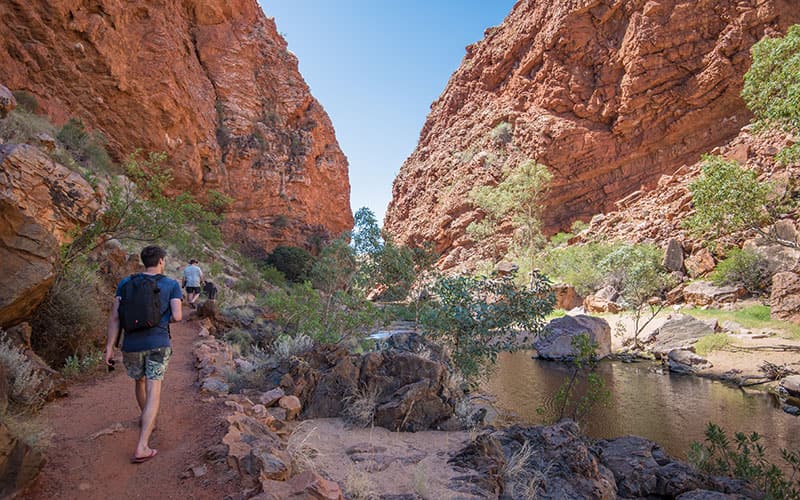 Found just 18 kilometres from Alice Springs, Simpsons Gap is one of the more convenient destinations in the West MacDonnell Ranges. Here the towering wall of the Simpsons Range is split by a narrow band of water, and the dried up creek bed leading into the gap is filled with twisted Ghost Gums. While the easiest and most obvious thing to do is to walk straight through the centre of the gap, you’ll only get so far before you run into a waterhole. Instead, there are a number of walks you can try – ranging from 15 minutes to a few hours. The Cassia Hill Trail is an approachable, one-hour round walk that retreats from the gap and takes an elevated route, with spectacular views of the wider Simpsons Range. If you’d prefer to keep the driving to a minimum, you can also reach Simpsons Gap using a sealed bicycle path from Alice Springs. The best time to visit is in the early morning or at dusk, when you can spot black-footed rock wallabies munching on spinifex. 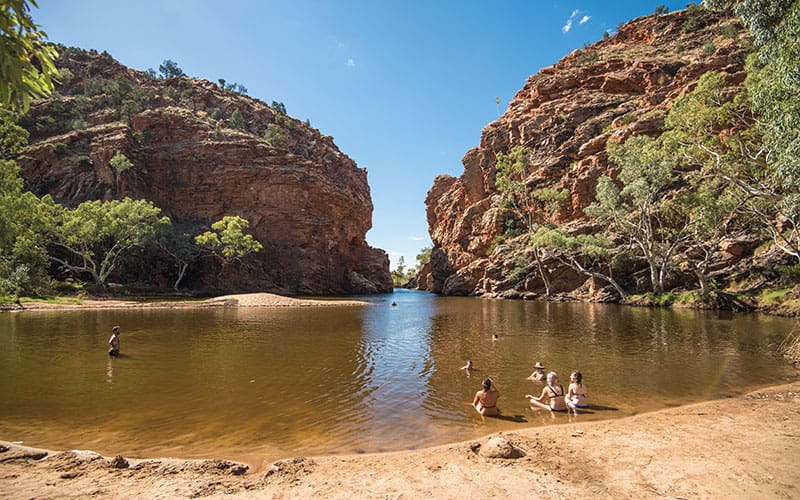 Ignore its less elegant nickname (‘The Big Hole’). You’ll find Ellery Creek is actually a sandy-beached oasis tucked between two ridges. The picturesque swimming spot was carved out of the rock after thousands of years of flooding, and the overlapping concentric circles etched into the surrounding cliffs are a reminder of just how ancient this place really is. It’s easy to while away most of the day here thanks to the number of walking trails available, excellent croc-free swimming (race you to the end and back), and a gas barbecue picnic area. The best option is to swim out to one of the boulders in the middle of the gorge and soak up some sun on the rocks. While the dirt road leading to the creek is bumpy and riddled with pot holes, once you’ve settled in you’ll never want to leave.

Don’t be fooled by the name. There’s no snakes or crocodiles hiding under the water at Serpentine Gorge. The waterhole actually gets its name from the narrow winding gap that courses through the West MacDonnell Ranges. During the dry season, the gorge is the only remaining waterhole in the area and it attracts thirsty wildlife from all around, especially birdlife. There’s a variety of hiking trails to explore too; it’s just a matter of choosing whether to go low, under the welcoming shade of River Red Gums, or high on to the cliffs overlooking the rugged MacDonnell Ranges. 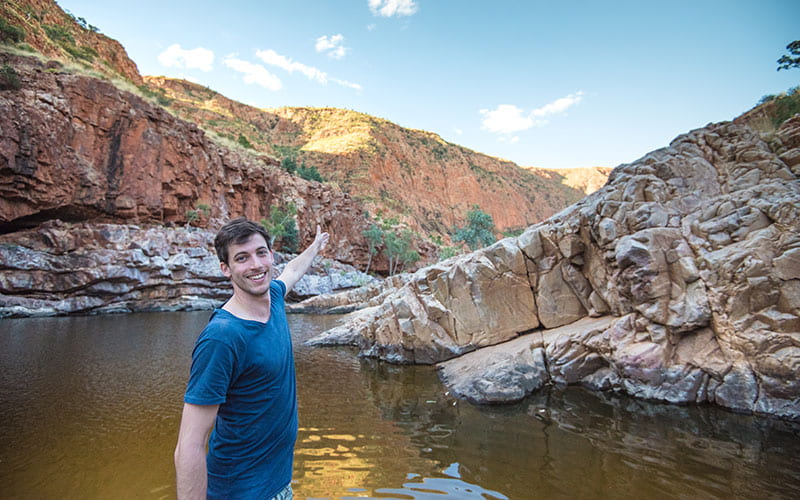 While not as dramatic as Simpsons Gap or Serpentine Gorge, Ormiston Gorge is still a breathtaking swimming spot thanks to the surrounding red walls and groves of white-limbed eucalypts. There’s more sandy beaches here too, which means you can lay down a towel and picnic within toe-dipping distance of the water. The relative isolation and geographical protection provided by the gorge means it’s an important refuge for some of the region’s smaller marsupials, such as the long-tailed dunnart and central rock rat. If you’re looking for something a little more active, the Ormiston Pound Walk is a 3-4 hour hiking circuit that crosses rocky slopes and offers views overlooking the gorge. Make sure to hang around until dusk, when the interplay of light and shadow brings the red cliffs to life, and all you can hear is the sound of footfalls echoing off the rock. Most visitors will have left by now and you’ll have it all to yourself. 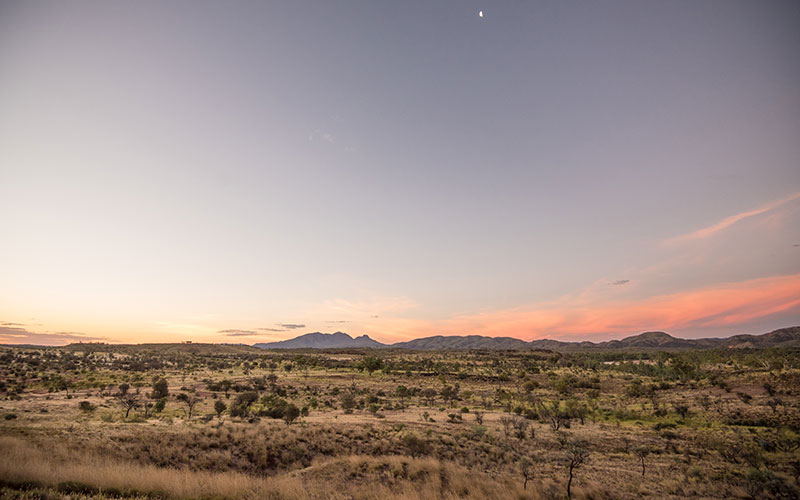 One of the last stops along the West MacDonnell Ranges is Glen Helen Gorge, where the range meets the Finke River. The Finke River waterhole is believed to be the home of the ancient Rainbow Serpent, a deity who helped create the landscape, and is therefore off limits for swimming. With that said, there are still other swimming spots and hiking trails to be explored. After a day on your feet, stop in at the Glen Helen Homestead Lodge for an ice-cold beer or walk to Mount Sonder Lookout and catch a spectacular sunset across the mountain ridge.

Keen to start your own Outback adventure? You can see the highlights of the West MacDonnell Ranges on our Red Centre Adventure tours.

Thanks for sharing the outstanding blog.