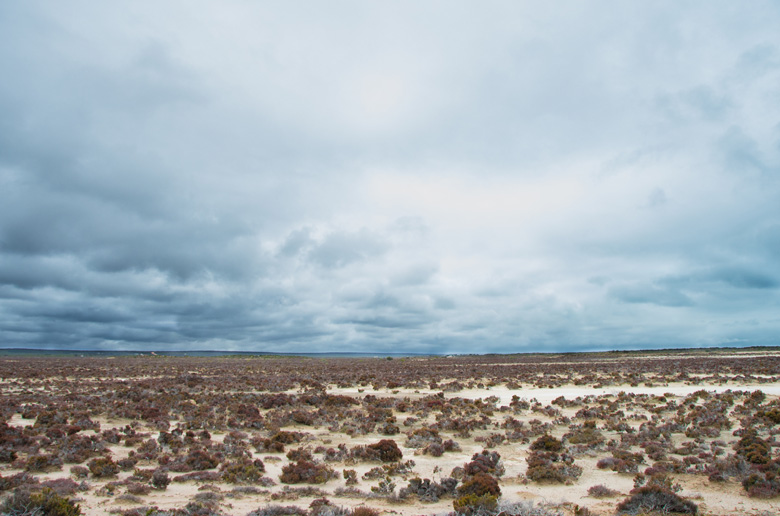 Trina and I sat on my mum’s couch in Manchester, listening to a family friend try his best to talk us out of travelling across the Nullarbor.

“There’s absolutely nothing there, Deano. Just fly from Adelaide to Perth, I’m telling you, the drive isn’t worth a sausage,” Bob ‘the Gob’ said. He still added a vowel to the end of my name, a letter I used to carry with me between the ages of 5 and 14. “Have a word, Angela, they’ll be wasting their time on nothing!”

Eleven months later, here we are on Fraser Range Station, peering out through our tent’s mosquito net; watching lightening fracture the night sky behind the silhouette of the Nullarbor’s final stop.

This wasn’t the first time Bob had been wrong, but it did make us fixate on the Nullarbor. We decided to drive it. Trina would capture the emptiness with her camera and I would sentimentalise its image in words. How hard could it be? But that was the problem. Every time we came across nothing, we found something. 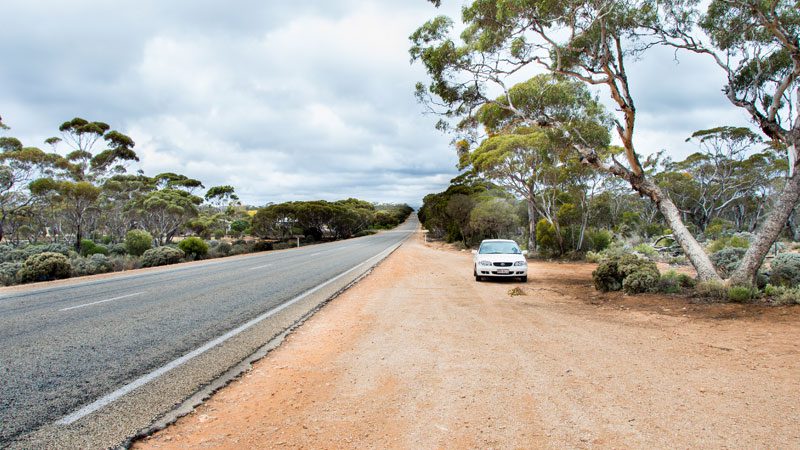 We would be driving this barren stretch in the comfort of a 2001 Toyota Corolla: a 14-year-old white warhorse that had rolled up 270,000 kilometres on the clock already. Even before gracing the plains of the Nullarbor, this second hand car carried us from Cape Tribulation down to Port Fairy, as well as covering the length and breadth of Victoria in the space of eight months. We named her Betty.

The time had come to see the rest of Australia, and the Nullarbor was one of our first big tests. This is where Betty would earn her stripes. The light green ones.

Admittedly, the Nullarbor started out as the underdog of our trip. Crossing the world’s largest piece of limestone (200,000 km2) may have sounded grand, but it also felt like we’d have to endure a trial of patience. Derived from the Latin term nullus (nothing) arbor (tree), Bob had a wee bit of truth about him. He just forgot to mention the bit about the tree.

The road between the Head of Bight and Fraser Range Station was a way of getting from Adelaide to Perth. East to west, this vast expanse is bookended by the cartoon-blue waters of the Eyre Peninsula and Cape Le Grand, boasting the longest straight road in the world. So we didn’t expect this journey to be all killer, no filler. The Nullarbor was merely a challenge, we thought, that rewarded adventurers with a printed certificate of completion for enduring its nothingness. Yet there had to be evidence of how and why the Wangai and Spinifex peoples were able to live in this place. A space where trees couldn’t grow. 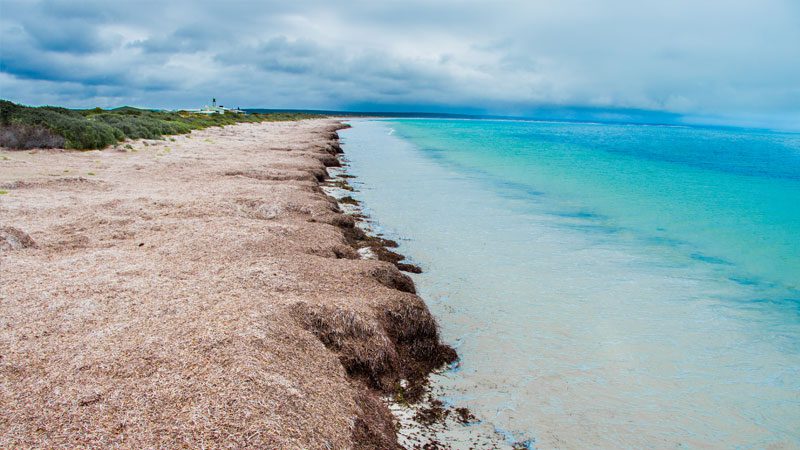 The windswept coast of Fowlers Bay.

Approaching the Nullarbor was like preparing to face an imaginary foe. Fowlers Bay became a locker room, a place to pace our steps and wrap up the last of our self-doubt. As the sea piled haystacks of seaweed against the shore, the Bay slept between the dunes and the ocean. Trina stood alone on the jetty, waiting for a rush of people or an alarm to sound. The one person we saw threw a gentle wave our way, but we didn’t see the face behind the beard. We left as quietly as we arrived.

On the way out of the town, we could almost see Zzz floating above it in the rear-view mirror.

The sea behind the desert

In the western reaches of Yalata Aboriginal Land, the head of the Great Australian Bight crowned and its shine drew us in. To the right of the road, multiple lanes disappeared in the distance to places we needed a permit to enter. And a 4WD. Betty could fend off corrugated roads, but these passages were a different weight class. Thankfully, the way to the Bight had been paved for those of us with low clearance.

At the entrance of the Bight, we were told we’d just missed the Southern Right Whale’s annual residency. Trina’s face and shoulders dropped. From June to October, mothers and calves leave the feeding grounds of the sub-Antarctic to the warmer waters in the south of Australia. The bluish yin yang between the two shades of sea is the only place in the world these whales migrate to. It was now the second week of November and the nursery was empty. We’d been chasing the ghosts of whales all the way from Byron Bay. 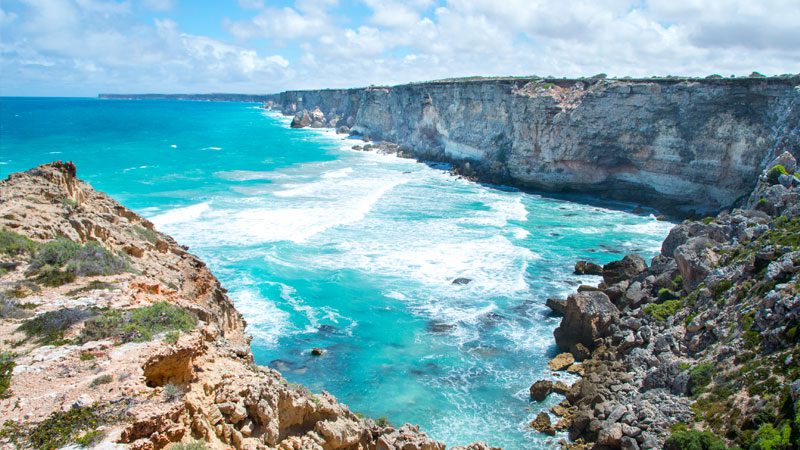 The cliffs at Head of Bight.

As we strolled down the boardwalk to the Bight, Trina peeled off from me and put the lens cap in the bag. This was her kind of world. Shadowy skies and a violent seaside, a sight that seemed darker and more menacing with deep swipes of colour everywhere. The enormity of this country made me feel small. Untold years of erosion looked as though giants had wiped the smile off the cliff faces.

Right down the walkway, crows rested on posts and swooped into the gulf of the Bight when we passed. You could smell the power of the scene below. A chalky fragrance puffed and rose from where the Bight smashed against the rocks, like two blackboard erasers being clapped together. I used to think the white cliffs of Dover were impenetrable. Compared to this they looked like a Lego fortress.

How to sustain life

Crossing from South Australia to the West is far from easy. A strict quarantined border is enforced to counter, according to warning signs, the illegal crossing of fruit and nuts. This ensures the survival of each state’s native fauna and wildlife.

Twenty kilometres before the border, we stopped at the side of the road to pig-out on nectarines and pecans. Border patrol frisked Betty and found nothing. The three of us were now free in the wild lands of Western Australia, eager to refill our supply of fruit and nuts. In deserted lands, high-energy foods can be a lifesaver. Rock and roll. 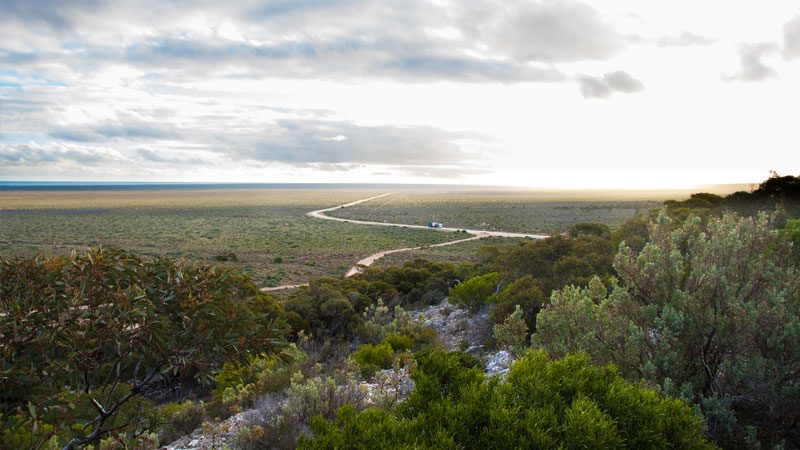 Our route across the plains.

Further down the coast, the Nullarbor meets Eucla Basin: an extreme climate where the desert spills over into a scarcely habitable world. Maybe this was the nothing that Bob had been so critical of. And I kind of get what he was saying. We drove for hours on end without seeing anything move, apart from a light breeze through the bush.

Animals rarely venture this way unless there’s a storm, when the rains have nourished the ground. This leg of the journey was desolate, until a huge red kangaroo skipped out right in front of Betty. Twenty metres away at most, with our car travelling at 110 kmph, we were lucky the kangaroo didn’t break its skip. But it did beak up the monotony.

I started to enjoy the emptiness. 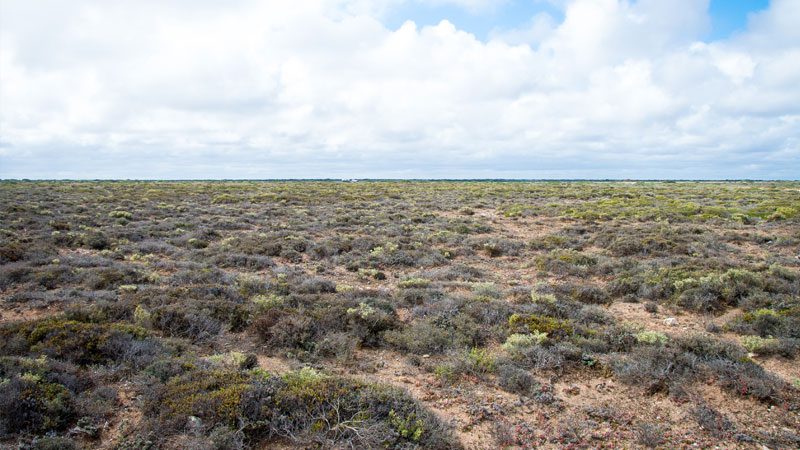 The empty nothingness of the Nullarbor.

Eucla. A strategic base

Getting closer to Eucla, levels of texture crept out from the bitumen to the outer gravel and powdery mustard of the earth, through low-lying shrubbery to hills and clouds that promised rain in the near future. The ground was hard enough to bend tent pegs into hooks. And it did, time and time again.

Eucla felt like an island on the Nullarbor. A diehard working community is entrenched in this roadhouse-cum-town, relying on those who pass through it. With at least five hours of bitumen between it and the next town, staff travel in from dusty villages with tiny populations.

Close by, an old telegraph station is a welcome attraction, a ruin of a not-so distant time. I imagined one person occupying the station almost a century ago, and wondered if they ever felt as far removed from civilisation as we did. 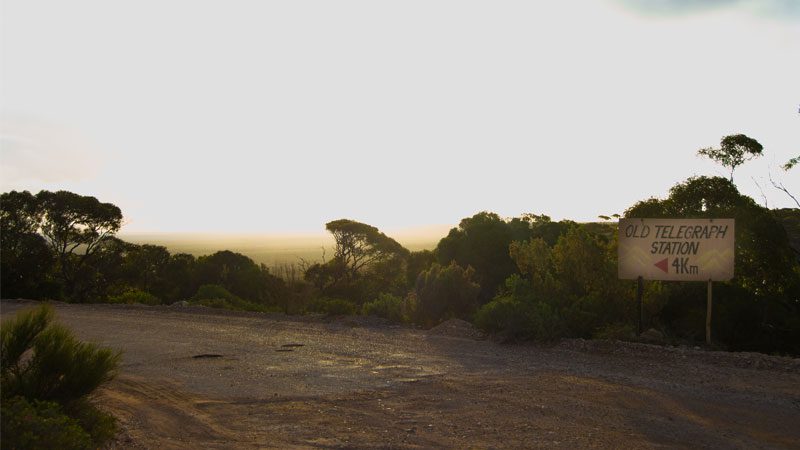 A signpost to the old telegraph station near Eucla.

Our image of Australia

A hundred kilometres west of Balladonia is where old Australian ideals once thrived. That’s where you find Fraser Range Station: a haven between petrol stations and roadhouses. A farm, an oasis, a retreat… a place we could gain or lose six months of our lives. A stop that was recommended to us by the good folk in Ceduna. This was what we’d imagined Australia to be.

The arid dirt had been nurtured here to a provide a thriving lake of red earth, where green patches of grass were like lily pads filled with yellows, purples, blues and oranges. Away from the gardens, rusted cars dotted the farm and acted as signposts. One had cardboard dangling from its grill: “1927 Chrysler A60. Traded for a camel”.

After setting up the tent for the night, we found ourselves back in the gardens and sat on a bench. Lapping up every last drop of the day. A man dressed from hat to boots in beige work wear appeared and wandered over. He crouched down beside us to turn on the valves of the sprinklers.

James introduced himself as Jim, but left us to presume what his role was on the farm. He looked like he was in his mid-60s: leathery and bronzed. We talked about where we’d come from, where we were going and certain things we wanted to see along the way. He told us about his years of working in the mines near Tom Price and how he’d travelled the length of the country a fair few times; passing on a bunch of comments and tips in the process.

“The roads of the Northern Territory are a work art,” he said. 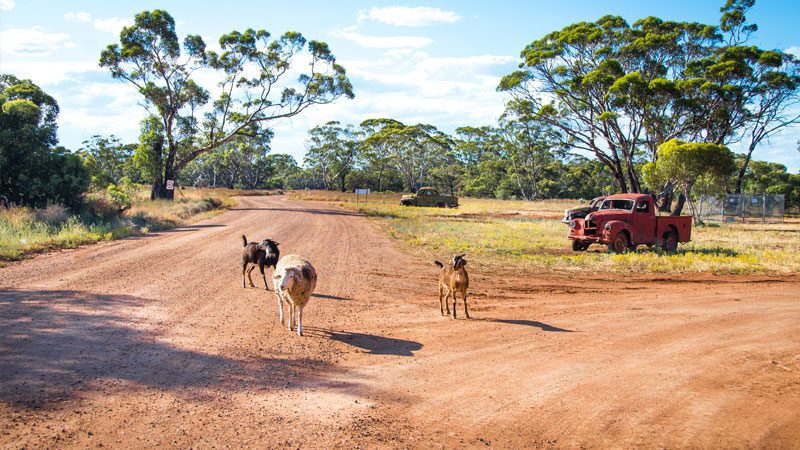 The locals at Fraser Range station.

Jim seemed like a proud man. “We’ve been here nearly two years,” he said. “There was no colour before I tended to the ground.” A huge, faultless white smile lit up when he talked about his wife (“up in the homestead”) and their current adventure. “After I finished in the mines we just wanted to keep moving and wound up on the farm. It’s not a bad place, eh?”

We later saw an employment sign looking for ‘travelling couples’ to work on the station. We talked it over. Maybe one day.

As our last night on the Nullarbor began, grey kangaroos followed the shadows that fell across the nearby mountains to the base of the station, weaving through flocks of wild emu. A strobe of light flashed in the distance. Not a sound disturbed the scene.

Trina sat up on the blow-up mattress and looked at me over her shoulder.

“Do you have Bob’s number? He should see this.”

Want to explore the Nullarbor for yourself? Check out our range of tours along the Southern Ocean.