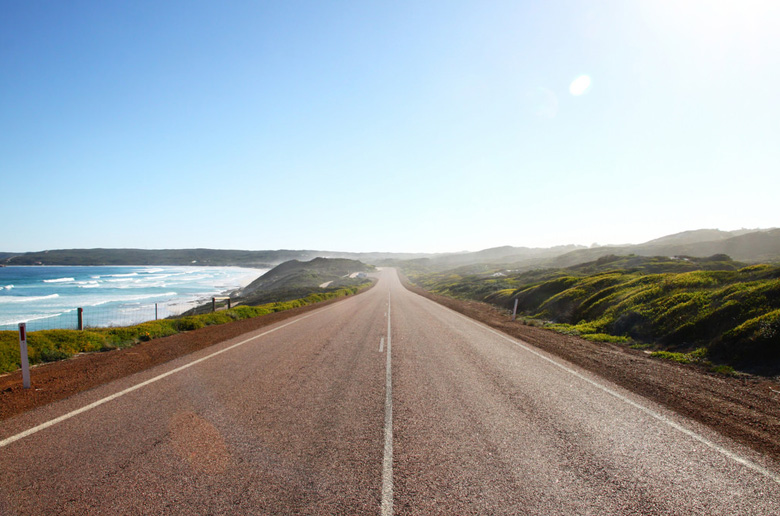 We’re cruising along the clifftop highway, the minibus taking turns ponderously, grinding up the gears as we climb through a stand of eucalypt trees. All of sudden the ground to our left drops away and I hear my mate behind me scoff and say, ‘Oh stop it, Australia!’ I know how he feels.

There’s nothing better than driving the Great Ocean Road on a day like this, particularly the stretch between Lorne and Apollo Bay where massive sandstone ridges plunge down into the sea. Bass Strait is almost unnaturally blue. Little white caps dance on the water far below. Your imagination can almost make out the white ridges of Antarctica on the horizon. Seagulls wheel overhead and the whole scene is washed in late January sunlight. Throw in a hot, flaky pie from the Anglesea bakery I may as well be in heaven already. My mate shakes his head again in mock outrage – a disciple who tires of miracles. ‘Just stop it.’ 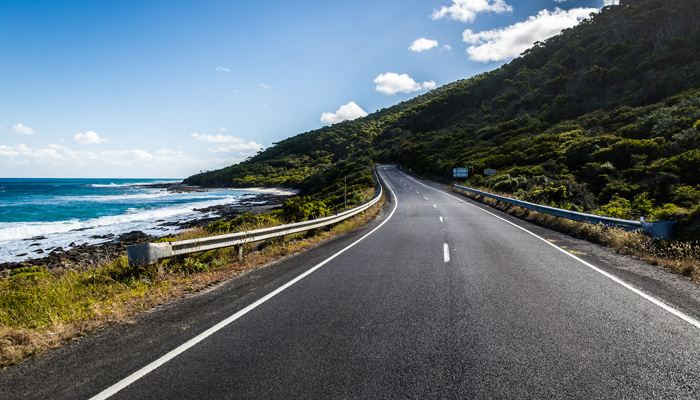 Day-tripping the Great Ocean Road is possible, but kind of misses the point. Why rush inland all the way from Melbourne to Port Campbell just to get a snap of the Twelve Apostles, when you can take your time and wind your way along the coast from Torquay? Do yourself a favour: set aside a few days and do the Great Ocean Road properly (or better yet, with a local guide on a small group adventure).

Here are our favourite stops along Victoria’s classic touring route. 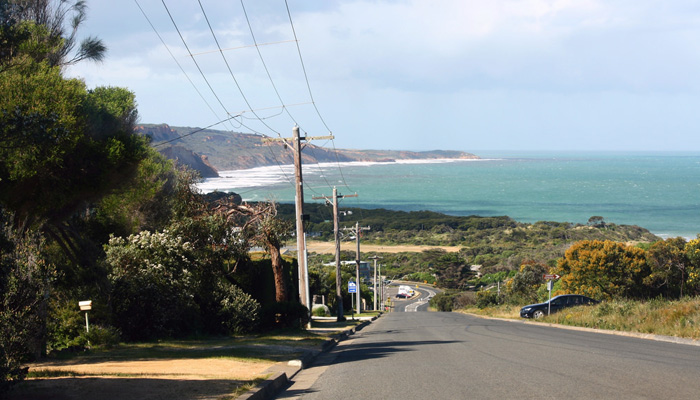 A great place to kick-off your Great Ocean Road journey. Anglesea is a sleepy coastal town for about nine months of the year, and a booming summer escape for the other three. For road-trippers, it’s a chance to refuel with a pie from the bakery on the main street, or the fish and chip shop closer the river estuary. You can hire paddle bikes on the riverbank during summer and the picnic areas near the beach are a favourite with families year-round. The beach itself is classic Surf Coast: a wide strip of sand with a few craggy sandstone cliffs at one end and a rolling break just offshore. It’s rare to see the ocean without a few wetsuit-clad surfers bobbing up and down beyond the breakers. Keen golfers should give the local course a try: it’s one of the few where kangaroos outnumber people. Pro tip: stop by Jums for the best chicken, chips and gravy you will ever eat. You’re welcome. 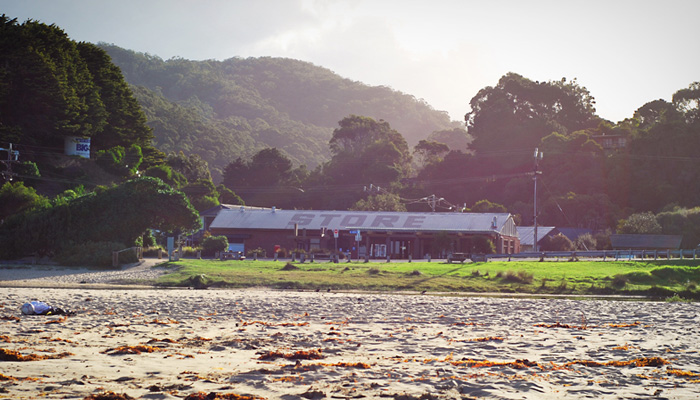 There are a number of picturesque stops along the Great Ocean Road, often found where the rivers trickling down from the hinterland flow over sand flats and meet the sea. Wye River is my favourite of these: an underrated little town with a single hotel, general store/cafe and a few holiday houses scattered up in the hills. It was one of the towns hit hardest in the Victorian bushfires that blew through the coastal region last Christmas, but it’s already beginning to bounce back. If you’re looking to stretch your legs, head to Wye General (the town’s trendy delicatessen/café), grab some provisions, cross the road and have a picnic down on the beach. Pure bliss. 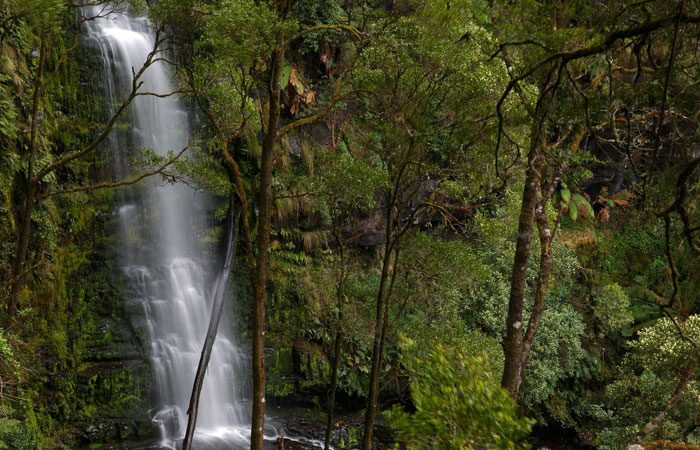 First-timers appreciate the Great Ocean Road for its ridiculous views and the long, sandy beaches. But old-timers know that there’s magic up in the hills too. One of my favourite spots along the whole coast is Erskine Falls (Triplet Falls a bit further along is also a beautiful spot, but Erskine has a more secluded feel). After grabbing a burger in Lorne, the Great Ocean Road’s biggest town, head up into the forest (you hang a left at the roundabout at the entrance to town) and you’ll find Erskine Falls. There’s a steep, stepped path than leads down to the base, with a few considerate benches along the way if your fitness is as poor as mine. It’s quiet, shady and cool, especially in winter. A good spot for a photo-opp and a breath of fresh air.

As you drive further west, towards Cape Otway, the landscape begins to change. Dense eucalyptus forests and blackened gums give way to gentle sloping hills, green meadows and farmland. Less wild, but equally beautiful. Most tourists and day trippers don’t make it past Lorne, so Apollo Bay has a much quieter, old-school feel about it. Gentrification hasn’t really made it this far along the Great Ocean Road, and the main street here looks pretty much as it has for the last few decades: small independent stores and locals shopping at the IGA. Stop for a bite at the fantastic bakery (the vanilla slices are top notch) then drive round the point a little way: there’s a secluded strip of sand near the river mouth that’s perfect for a dip in summer, or a long walk in winter. 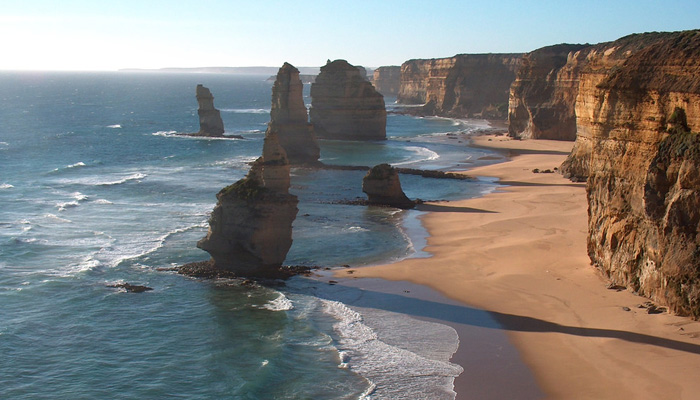 The Great Ocean Road’s signature postcard shot. This is the image most tourists have in mind when they board the big coach buses that ship them all the way from Melbourne. You can reach the Twelve Apostles in a few hours if you take the direct inland route, but it’s much more satisfying to reach them along the coast. The best times to visit, if you can manage it, are dawn or early evening –the setting sun hits the limestone and the whole scene just comes alive. Make sure to save a little time to explore nearby Loch Ard Gorge and the Gibson Steps too. The Apostles are eroding at a rate of about 2cm per year, but the waves constantly slamming into the limestone cliffs will probably create new stacks in the future. So don’t worry, we’ll be enjoying these views for a while yet. 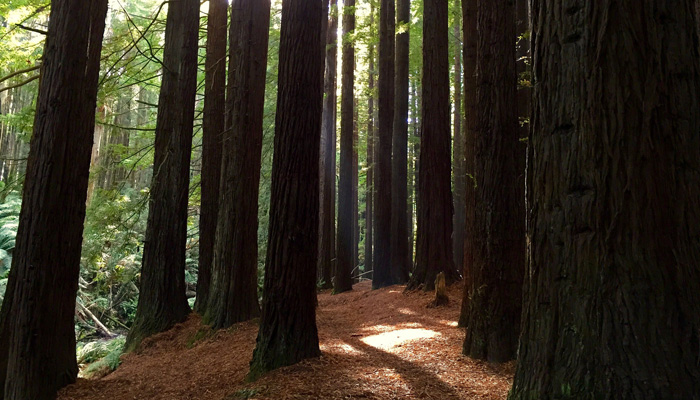 The Otways technically stretch all the way from Anglesea, but most people associate the National Park with Cape Otway, the wild headland just west of Apollo Bay. If you’ve had enough of the spectacular Great Ocean Road scenery (after all, how many photogenic vistas can one person take in a day?) turn inland when you hit the cape and spend a couple of hours getting happily lost in the winding forest roads of the Otways. My favourite place in the forest is a little stand of Californian redwoods that has been growing steadily since they were planted in the 1930s. Just follow the unsealed logging road near Beech Forest and you’ll stumble on them: hundreds of pencil-straight trunks, 60m high with sunlight spearing through at dramatic angles. It’s not California (yet), but it is a pretty cool spot.

Aussie’s know Airey’s Inlet for it’s red-capped Lighthouse, made famous in the 90s TV show Round the Twist. It’s a town that doesn’t get as much hype as Lorne or Anglesea, which is sort of how the locals like it – blink before you hit Fairhaven and you might miss it entirely. If you’re lucky the local market will be in full swing. It runs about four times a month and features a bunch of local-made homewares, vintage clothes and artisanal foods. Otherwise you can browse the shops on the main strip (‘strip’ might be generous – Vegas this is not) but a better idea is to head up into the nearby Great Otway National Park and stretch your legs on one of the various walking trails. There are 140 species of bird in Airey’s, so you might spot a few ornithologists strolling beneath the trees.