Home Features Should you climb Uluru? Here’s what the experts say
Features 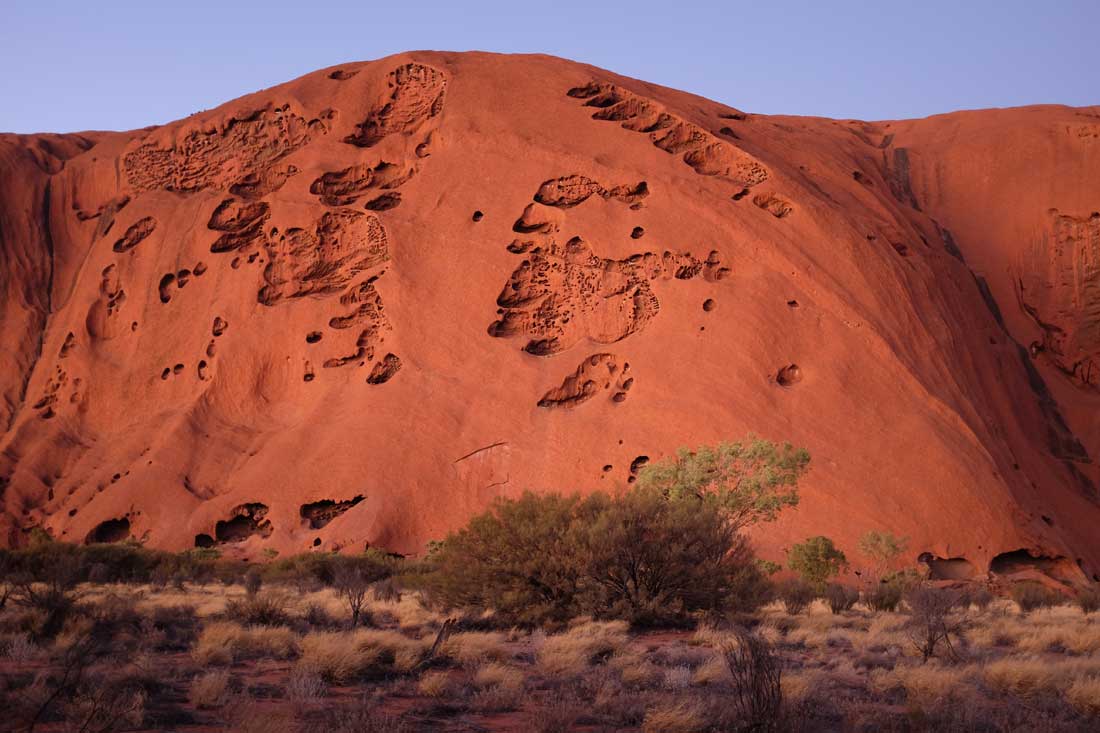 When you walk around the base of Uluru, you reach a spot that’s divided travellers, locals and politicians for decades. A simple chain handrail snaking up the rock face, and a sign that says ‘We don’t climb’. It’s at this point you have a choice.
Since tourism came to the centre of Australia, thousands of people have climbed Uluru. Some have died in doing so. These days, there’s no legal requirement stopping visitors from climbing Ayer’s Rock (the Hawk government gave native title back to the Anangu people in 1983, but Uluru is technically on lease to the Australian Parks and Wildlife service – it’s a tricky system). To the local Anangu people though, climbing Uluru is essentially a desecration of one of the most sacred sites in all of Australia. It’s why we were the first tour operator to stop climbing the rock, and why we’ve spent nearly every day since campaigning for others to stop as well.
We sat down with Leroy from Red Spaces, the company we work with on our Red Centre tours, to chat about why climbing Uluru has become such a contentious issue. 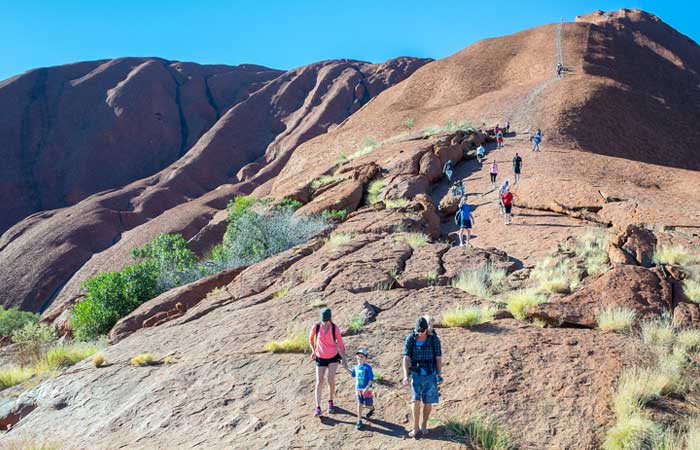 To climb, or not to climb

“My name is Leroy and I have lived here at Yulara, near Uluru, since 1997. The question of whether to climb or not to climb is one I’ve had heard answered thousands of times  by the local Indigenous people, the Anangu. I’ve worked with them for 20 years. Here’s my attempt at an answer:
Firstly, it’s important to understand that the Anangu have no concept of the word “own”,  unless it has to do with stories. Basically, you can only own the stories of your own Country. Not possessions, and certainly not the land. So when a ‘traditional owner’ is asked a question about laws and rules, they can only really answer in regard to their own ‘Country’. 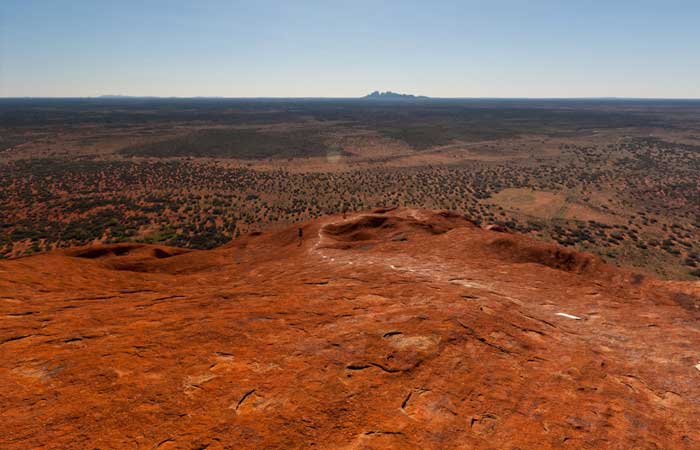 Since the coming of the white man, many Indigenous people from around Australia have been displaced and now reside on Country, here at Uluru, where the stories do not belong to them. When they’re asked questions – like the classic ‘to climb or not to climb’ –  they often give answers that the questioner wants to hear. Sometimes these aren’t correct. Having spent the last 20 years with the traditional owners of this land, I’ll try and put 50,000 years of oral law into context.

That’s a really important sacred thing that you are climbing… You shouldn’t climb. It’s not the real thing about this place. And maybe that makes you a bit sad. But anyway that’s what we have to say. We are obliged by Tjukurpa to say. And all the tourists will brighten up and say, ‘Oh I see. This is the right way, the thing that’s right, this is the proper way: no climbing.
– Kunmanara, traditional owner

The ‘traditional owner’ of an area is not only a custodian of the land, but also custodian of all the creatures, plants and people on it. This includes any welcomes visitors (as all travellers are, having paid their visitor fee). This traditional protection is considered so vital that punishments are in place for those that break the bond. It’s a responsibility the Anangu feel for all that travel here. So when a visitor climbs Uluru, falls and gets hurt, the traditional owner is put in a terrible situation. The Anangu simply ask us not to put them in this position. Not to take stupid risks in a harsh landscape that we don’t understand.

Even though the Anangu can’t understand why visitors continually put themselves in harms way, they choose not to ban the climb. Why? Simple. For 200 years we have kept them from their desires and told them what they can and cannot do. They know how it feels to be told ‘no’, and unlike us, they’re not hypocrites. 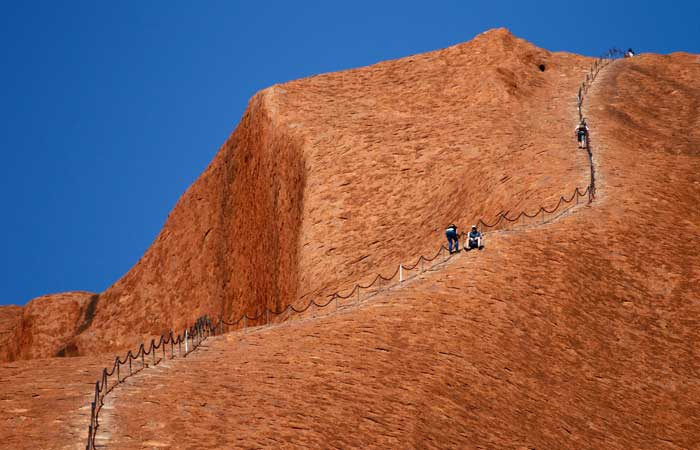 The good news is, in the last few years we’ve seen the numbers of climbers dwindle. There’s a few reasons for this. First, the number of adult park entry tickets has fallen from 480,000 a year in 2004 to about 280,000 now. Secondly, tourists are becoming more sensitive to cultural issues. This probably means that those who only wanted to visit for climbing now go elsewhere. Some Anangu Elders are aware of this pattern, and it’s another reason they’re hesitant to ban the climb entirely: a drop in tourism and job numbers could be blamed on their communities.
With the Anangu now actively involved in training tour guides, as well as the media highlighting the issues and government Rangers closing the climb during bad weather, we’ve been able to avoid a fatality on Uluru for many years. Some illegal climbers have fallen and injured themselves recently, but no amount of regulating is going to stop that sort of thing. In fact we now have more problems with people walking around the rock: it’s a 12km track and there’s only one water-station.

So, should you climb?

As I explained earlier, the Anangu will never tell you not to climb. They’d rather you decide the correct path for yourself. With no reward at the top other than a view and a satisfied ego, they say it’s foolish to risk injury or death…especially while on a holiday. With about 35 deaths now and hundreds of severe injuries (many from dehydration) I tend to agree with them. As the only tour company in the northern territory to commit to Anangu employment every day of the year, I feel the Anangu will want you to not only know the truth…but print it.” 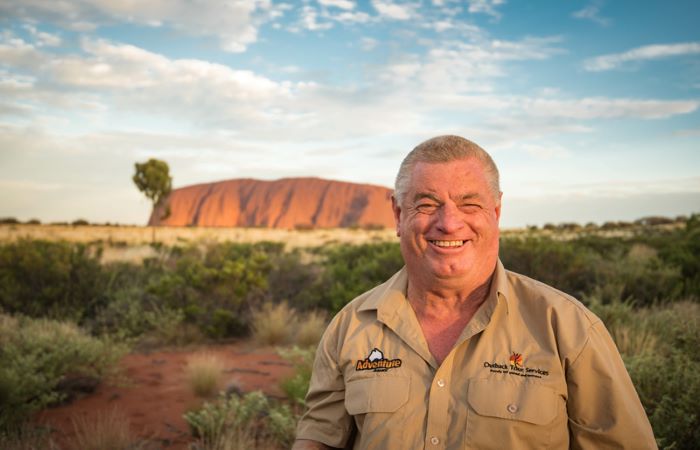 3 things you may not know about climbing Uluru…

Adventure Tours are proud to be involved with the Mutitjulu Community and its commitment to provide employment for Anangu . This mutual respect is shown by our patrons choosing not to climb Uluru…but rather walk with Anangu and share their stories.
Feature image c/o Patrick O’Neill
Should you climb Uluru? Here’s what the experts say was last modified: September 2nd, 2019 by Outback Yarns
northern territoryOutbackred centreResponsible Traveluluru
1 comment
1
Facebook Twitter Pinterest

Excellent article!
We couldn’t agree more and after visiting the area last year, we chose not to climb because of all the points you mentioned above. We felt so strongly that we chose to write our own blog post about why we chose not to climb to hopefully encourage other visitors to make the same choice.
http://wanderingon.com/why-we-chose-not-to-climb-uluru-and-you-should-too/

All the best,
Noelle