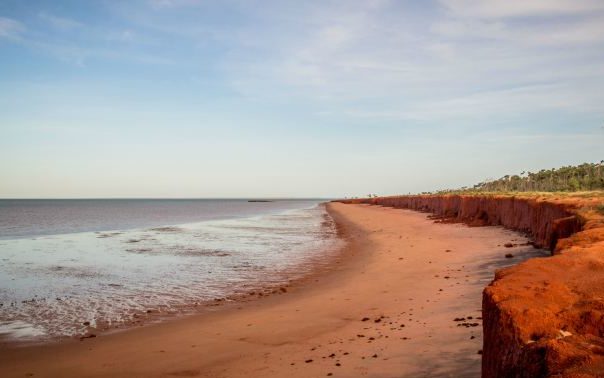 If you’ve spent any time travelling in Australia, you’ll be familiar with the tension between its Indigenous cultures and the non-indigenous population.

This is a country divided in its views about the Traditional Owners of Australia, and the further you get from the state capitals, the clearer this story becomes. But in one remote pocket of the Top End of Australia, three failed European settlement attempts meant that one group of Indigenous communities was able to continue their ancient way of life, which was almost uninterrupted until the early 1930’s – the Yolngu people of East Arnhem Land.

There are many excellent cultural tourism experiences available throughout Australia that allow travellers to learn from Indigenous groups across the country. But what makes Adventure Tour Australia’s 7-day Journey into East Arnhem Land such an extraordinary and rare opportunity is the chance it offers you to connect with a culture that has remained largely unchanged, less affected by centuries of colonial rule. Here are a people who have preserved their culture over thousands of years, who are still living in balance with nature. And what’s more, they want to share that culture with anyone who is open, humble and ready to learn. Recently, I was lucky enough to be one of those people, to experience the trip for the first time.

The expedition kicks off in Nyinyikay, in the Northern Territory. The easiest way to get there is via a 20-minute light aircraft flight. Passengers must pack light, as every kilo counts on such a small plane. After landing on the dusty red runway, travellers are greeted with a traditional ‘Welcome To Country’ from the Indigenous hosts. It’s difficult to convey the intensity and anticipation that builds throughout this experience, but rest assured that by the time the encounter is complete, you’ll feel as though you’ve arrived in another time, ready to learn the ways of the Yolngu people. 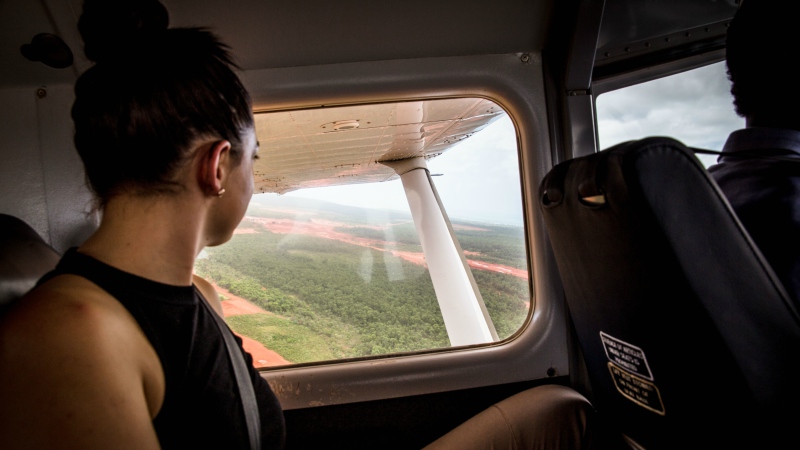 Looking out the plane window as we arrive. 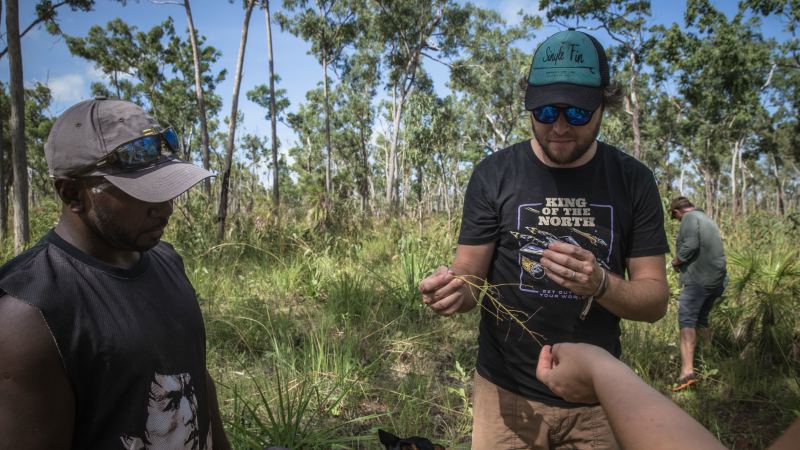 Marcus teaches the group about native plants in Arnhem Land.

You’ll be guided through the surrounding bushland on Nyinyikay and learn about which plants are good to eat, which are good for crafts such as weaving, and which are good for carving into tools. You’ll get your hands dirty as you dig for roots that can be used to make dye. You’ll taste the fruits of native plants that are totally new flavours, and you’ll learn exactly how you can survive on their nutrition. You’ll learn about medicinal species of plants and natural remedies that are provided by nature, right here in the open bush. 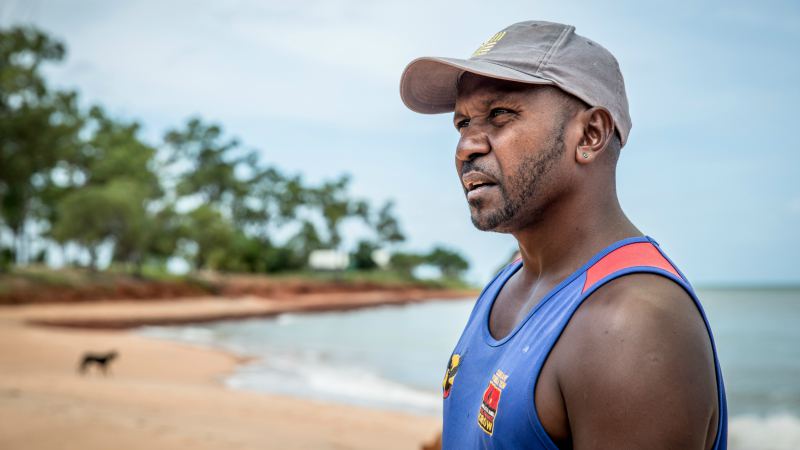 Marcus leads the men away on Men’s Business.

Initially, as a female who loves going on adventures in the outdoors, learning that ‘Men’s Business’ was only for the men in my group rubbed me up the wrong way; after all, we spend enough time in our own modern society being told what women can and can’t be good at, so I felt disappointed to see that the reinforcement of gender stereotypes was alive and well in a 50,000-year-old culture, too. But I guess that’s where the learning opportunity is – it forced me to think more about what I believe and why I believe it. And although I was more excited by the prospect of the ‘Men’s Business’ in the beginning, I actually found the ‘Women’s Business’ incredibly engaging and satisfying. We learnt how to weave baskets and make delicate necklaces from tiny shells, which was relaxing and mindful for the females in our group. (The same can’t be said for the Yolngu women who were clearly mortified at our lack of dexterity, watching in horror as we crushed one tiny, delicate shell after another in our failed attempts to pierce their shells with a needle.) 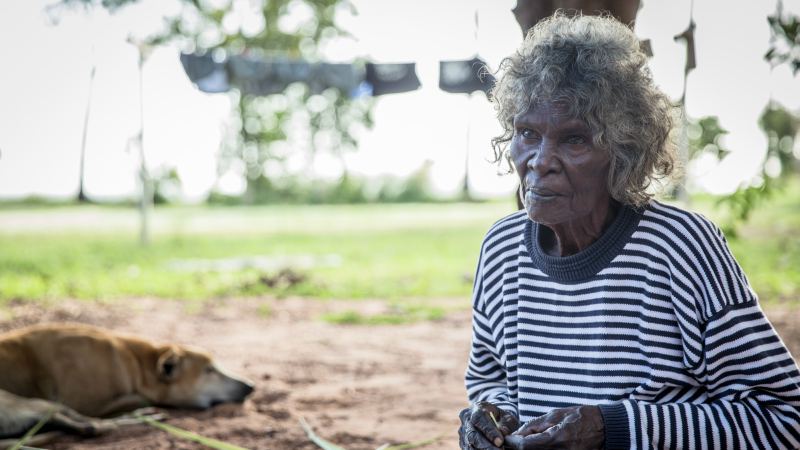 Meet Nancy, the matriarch: grandmother to our leader Marcus.

While we desecrated the pile of shells that the ladies had spent the entire previous day collecting, we learnt about the history of Nyinyikay and the women in their family. Nancy is the matriarch: grandmother to our leader Marcus, she is in her mid-eighties and can still hunt a stingray with her bare hands (how’s that for Women’s Business?!). The women were shy at first, but desperate to share their knowledge and stories with us. It was an absolute privilege to be able to sit and learn from these extraordinary women, to have the opportunity to ask them questions, but also to answer theirs. I came away with new questions about my own life and place in my broader family and community.

Food and facilities at Nyinyikay

The idea of bush tucker and native foods is excellent, but I wasn’t entirely sure it would fill the endless vortex of my appetite, so I was relieved that we had food cooked for us by our guide as well. The Nyinyikay homeland has a number of small properties on it, so even if you’re camping, there is full access to the kitchen and bathroom facilities. Our leader Marcus noted at one point that “our ancestors did it tough, they didn’t live in houses –  they did it the way the nature wanted them to live”, but that now they have a good balance between basic comforts and facilities, and the ability to live entirely off the land.

Why you should travel to East Arnhem Land

When I arrived in Nyinyikay, I thought I knew what to expect. Having travelled to Uluru and Far North Queensland and spent time talking to Indigenous communities through my work – all amazing and uplifting experiences – I felt that East Arnhem Land would be a similar adventure. But what I discovered here was different. In other communities that I have been lucky enough to visit, the heavy weight of history hangs over things like a chain mail, and you can never quite shake the feeling that your ancestors have done such terrible things to the place and its people. But in Nyinyikay, there is a sense of pride and a distinct absence of suspicion towards outsiders. Here in East Arnhem Land I felt almost as though I were being given a second chance, a chance to do what our European ancestors never did: to go there and be humble, to learn and to connect. 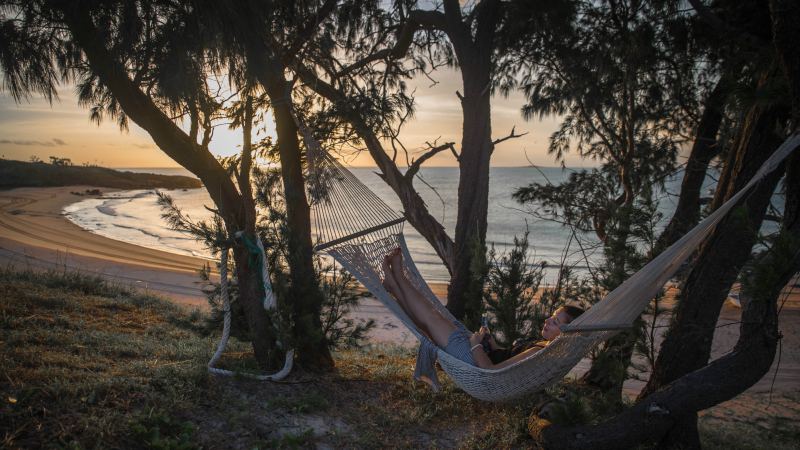 Relaxing at the lodge in Arnhem Land.

The term ‘transformational experience’ gets thrown around recklessly these days, but I genuinely felt like the sand was shifting beneath my feet while we were with the Yolngu at Nyinyikay. There’s a lot of things that you start to think about, big things: life, nature, the universe. Your mind starts ticking and you certainly feel a shift taking place in your perspective. The excellent thing about this trip is that after the time in Nyinyikay, the group heads out to Bremer Island to a remote wilderness eco-retreat named Banubanu. This offers the perfect opportunity to relax and let everything sink in. The luxury tented camp is a little piece of paradise, and you can spend time reflecting on your experience learning from one of the oldest living cultures on earth.

Ready to learn from the Yolngu people? Snap up one of the limited places available on Adventure Tour Australia’s special new expedition trip to East Arnhem Land.

This article appeared first on The Journal – The Intrepid Blog.

After completing her first Ironman triathlon a couple of years ago, Lucy has reframed her entire life through the paradigm of riding a bike or running (she never was too good at swimming). As a copywriter for Intrepid, she has been lucky enough to travel all around the world, in her mind, everyday at her desk.