Home Features Hike, kayak and cruise: The hidden secrets of The Tarkine
Features 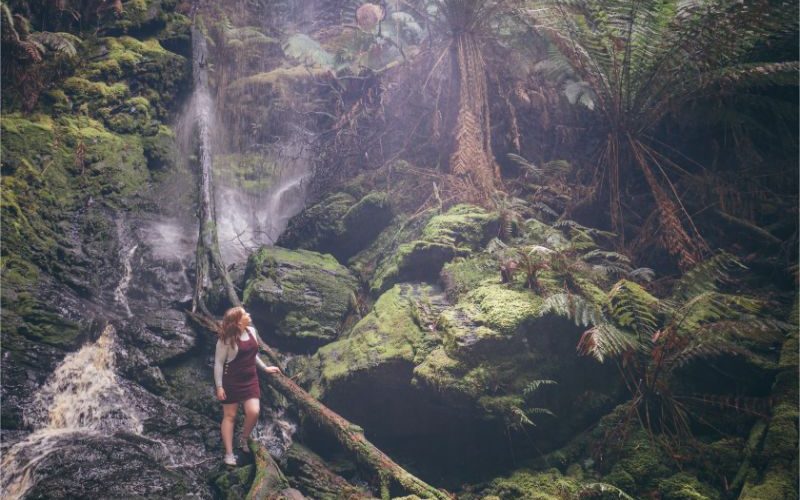 I’m listening to the beating heart of the Australian rainforest – a symphonic chorus of tweets and croaks against the low drone of cicadas – as I paddle down the slow-moving Pieman River in a kayak. It’s a soundtrack that’s about as pleasant to the ear as the surrounding forest is pleasing to the eye. Jumbles of vegetation cling to the river bank next to exposed tree roots that reach like bony fingers into the chocolate-coloured water. As I paddle closer to the river’s edge to catch a closer look, I fall under the shade of a thick forest canopy of myrtle, leatherwood and pine trees – their leaves hanging like stars in the sky. It’s as if I’ve been painted into a John Glover watercolour.

In actual fact, I’m in the Tarkine Wilderness Area in the North-West corner of Tasmania, a 447,000-hectare tract of land that’s actually Australia’s largest temperate myrtle-beech rainforest. It’s also a site of significant aboriginal history and home to more than 400 species of flora and numerous species of fauna, including Tasmanian devils, eastern pygmy possums and wedge tailed eagles.

RELATED: CHECK OUT OUR TASTE OF TASMANIA SMALL GROUP TRIP

I’ve come to the historic mining town of Corinna, the southern gateway to the Tarkine, and it doesn’t get much wilder than this. There’s no phone reception, certainly no Wi-Fi, and almost everything available here has been driven in from outside. But that’s all part of the charm of the place. It’s a chance to escape, to unwind, and strap on those hiking shoes, grab that paddle, and pack that camera and explore this ancient section of rainforest that dates back to a time when Australia was part of the Gondwana super-continent. Here’s a quick overview of the hiking, kayaking and cruising options available in this magical part of Tasmania.

Setting off from Corinna, there are 14 different hikes available for exploration, ranging from easy 30 minute walks along the banks of the rivers, to more challenging all-day affairs through the thick damp forest. The Whyte River Walk is an accessible 70 to 90-minute walk that takes visitors into the heart of the rainforest along boardwalks, plugging themselves straight into the Tarkine’s ecosystem within  minutes of setting off. Those looking for a more challenging, off the beaten track experience, can tackle Mt. Donaldson ­– a 4-hour hike that includes an ascent through the forest to a summit with commanding views of the Pieman River, the rainforest valleys of the Donaldson River, and the Southern Ocean to the west.

Historically, it was the Pieman River that provided access to the beauty of the Tarkine, not the roads that now connect the region to the outside world. But by hiring a kayak for a few hours or even a full day, visitors can immerse themselves in the Tarkine and experience this ancient rainforest and its many waterways just like the generations of yesteryear. A highly recommended paddle is the 1.5-hour trip (one way) on the water to Australia’s furthest inland shipwreck, the SS Croydon, which is still visible just beneath the surface of the Savage River, just off the Pieman. From there, it’s worth paddling the extra 45-minutes to Lover’s Falls, a powerful waterfall that’s ever so photogenic. Alternatively, those with the experience (and endurance) can paddle the 18-kilometres downstream from Corinna to Pieman Heads where the river meets the sea; the return journey will take around 8-hours.

It’s certainly possible to explore the Tarkine without breaking a sweat whilst still getting intimate with the rainforest and rivers. Built in 1939 with local huon pine, The Arcadia II was used as a supply ship during the Second World War. These days it takes guests on a leisurely cruise along the Pieman River, past the shipwreck of the SS Croydon at the mouth of the Savage River, further on to Lover’s Falls, and then to Pieman Heads on Tasmania’s wild West Coast where a delicious lunch awaits. Passengers are treated to expert and entertaining commentary along the way, telling the story of the World Heritage site – including its indigenous history – as well as personal anecdotes from the river. Passengers are also served tea, coffee, cake and biscuits throughout the duration of the 4.5-hour journey.

Want to explore the Tarkine for yourself? We’ve included a visit on our Taste of Tasmania small group adventure.

If I was friends with a magician, I’d message them on FB and ask them out for a beer. Then once at the bar, I’d plead like crazy for them to turn me into a bird so I could spread my wings and fly all over the world – for free! In the meantime, I guess I’ll just have to settle for being a travel writer with an incurable case of wanderlust and a remarkable ability to get lost. Follow him on Instagram at @theshaunbusuttil