Home Features Stories from the road: we explore Ningaloo Reef with DriveAustralia
Features 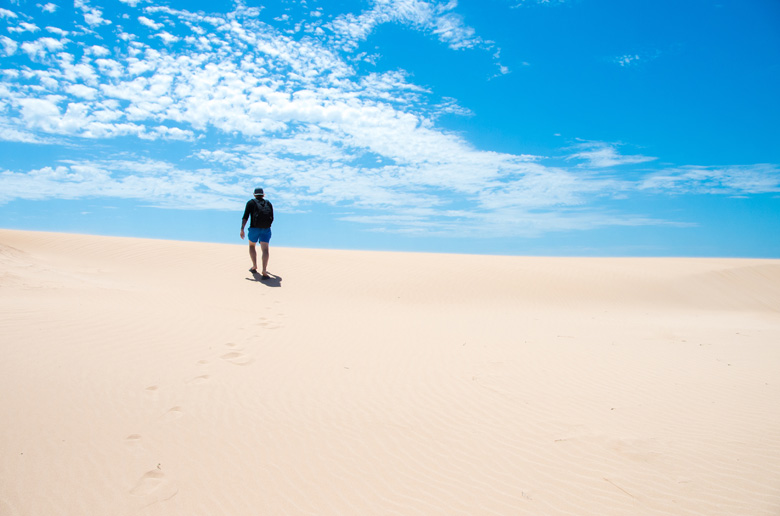 “What’s wrong?” Trina said, through the mouthpiece of her snorkel. My tongue churned and felt like it was expanding. Liquid salt poured into my face. I couldn’t get the words out.

“Say something,” she said. “You look like you’re about to cry.”

I bobbed up and down like a little buoy. Water ran down my face and I didn’t know if it was seawater, sweat or tears. My head went under one more time and on my ascent, tectonic plates shifted and the words erupted.

Ten minutes later we were sat on the rocks beside Oyster Stacks, a section of Ningaloo Reef, with my foot pouring with blood and nerves shot to pieces.

Yardie Creek without a paddle

17 kilometres north of the entrance to Cape Range National Park, the rustic farm of Yardie Creek Homestead is the base to access the area’s reef, creeks and dunes. Smack-bang in the middle of nature, it’s common to find an army of kangaroos grazing around your tent (pop to the bathroom around 3am). Our host, Marie, was a Western Australian from the depths of Margaret River. A dainty figure with wild eyes and a no-nonsense attitude, she had the personality of a monster truck: crushing you with truth and guiding you with reality.

“That Corolla is never going to get you past the (Yardie) creek. Don’t even try to drive down a path that isn’t signed.” She pursed her lips as if I’d already beached my car. “This woman is not pulling a pommy out of a ditch at any time of the day,” she said.

This was her reaction to our optimistic plans of driving to Charles Knife Canyon in a Corolla. As a child of the ‘60s, Marie had moments where she’d slip into an airy, tie-dye nostalgia and then return to the matter at hand. 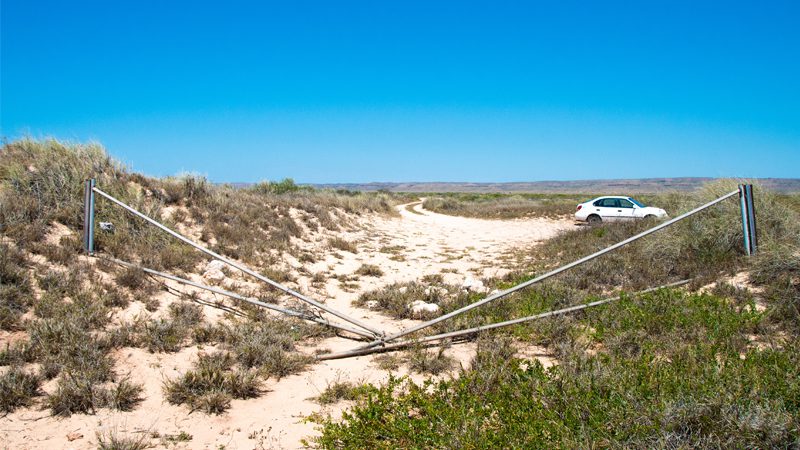 “This place was a wonderland where not many people came. It still is, I guess. You won’t see yourself a rock wallaby down the creek unless you jump in a boat,” she said. “Take a kayak down the water. That’s if those scrawny, pale arms will get you anywhere.”

I saw these cheap shots as playground tactics. But she was right. Not about my arms, but about not seeing a rock wallaby. Instead of taking the Yardie Creek boat tour, we took the one-hour return hike that ran through class 3 and class 4 trails (steep routes with high temperatures on the escarpment). We may not have seen the illusive rock wallabies that apparently defied gravity, but the views of the creek were worth the adventure.

I just didn’t have the nerve heart to tell Marie.

Across the sand dunes to Ningaloo 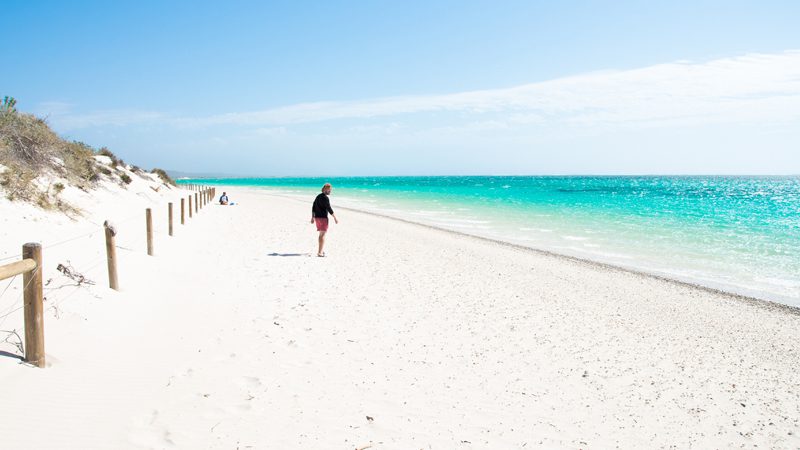 Perks of camping on a homestead is that it usually comes with continuous local knowledge. On our first day of snorkelling in Turquoise Bay, through the yellows and purples of the coral, we came across schools of tropical fish, stingrays, squid and green turtles. We told Marie of our find and her eyes lit up.

“I hope you’re going to pay me extra for this,” she said. Dotting and scribbling instructions on a local map, she directed us to a track five kilometres north that had the catchy name of “turn 2”.

We parked the car at a rusty, unmarked gate just off the road and mooched over the sand dunes to a stretch of deserted beach. Directly in front of us, in the shallows of the water, dozens of green turtles paired off to mate. Keeping our distance, in an early afternoon sandstorm, we watched for hours as loggerhead turtles began to join the party. It wasn’t a car-keys-in-the-bowl situation, but you get the picture. It was pretty special. 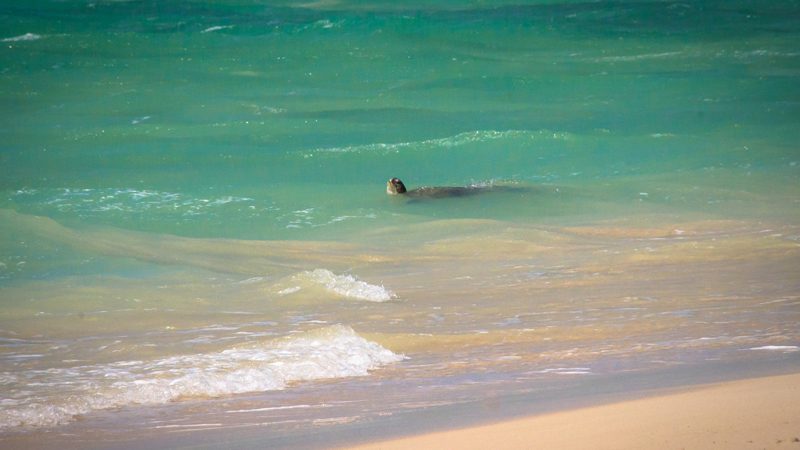 At nightfall we headed to Trisel beach, again on Marie’s direction.

“This is one of the only places in the world you’ll see greens and loggerheads doing this,” she said. Marie was referring to the fact that Ningaloo is the probably the most important mating and nesting site on Earth for these turtles. “And don’t go shining your torches. It’s not a disco rave.”

She passed us a leaflet on the conservation of turtles during nesting season. Predominantly aimed at the bloating tourist interest in the habits of turtles, the leaflet is basically a list of dos and don’ts that help protect their numbers. Marie educated us with worry on her face.

After negotiating the “suicide kangaroo” filled roads at 15 kmph in the pitch black, we left the car and allowed our eyes adjust to the moonlight. As per leaflet, we adopted the “commando position” when we spotted dark shapes up high on the beach. Crawling like two injured commandos, time became an issue. We lay silently in front of these three animated silhouettes for at least 30 minutes. Sand flicked back into our faces, which meant nesting had began. We crept closer (as per leaflet), staying low, and didn’t utter a word. 15 metres. 10 metres. Five. The closer we got, the clearer the image became. And what a scene it was. 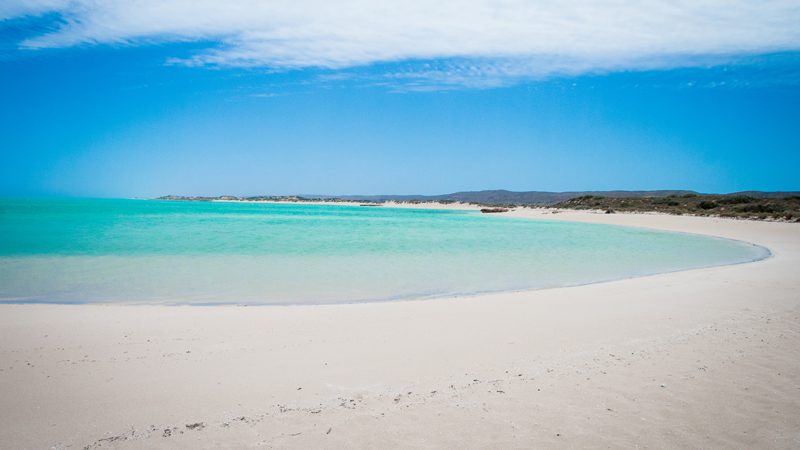 The whole time we were there, we’d been crawling towards the shadows of three bushes that were blowing in the wind.

And that, my friends, is how we roll.

In the morning, we headed back to the same spot and noticed huge turtle trails (they look like 4WD tyre tracks) and ditches where the turtles had nested. They probably followed the same route we crawled. Happy days.

The truth about the shark

Before you get the impression of a Mick Fanning-like narrative (a route that I admittedly sent you down), I should probably tell you the details. The catalyst to the whole debacle was a grey reef shark, and my wounded limb was caused by a barefoot retreat over broken oyster shells. As common and harmless as these sharks generally are, the sight of a two metre fish heading your way is pretty terrifying. Especially when you’re the only people in the water.

Yet this is the ace that finely balances on a house of cards. The northwest coast of Australia is freely natural and beautiful but, above all, wild. Sometimes not every adventure goes as planned. 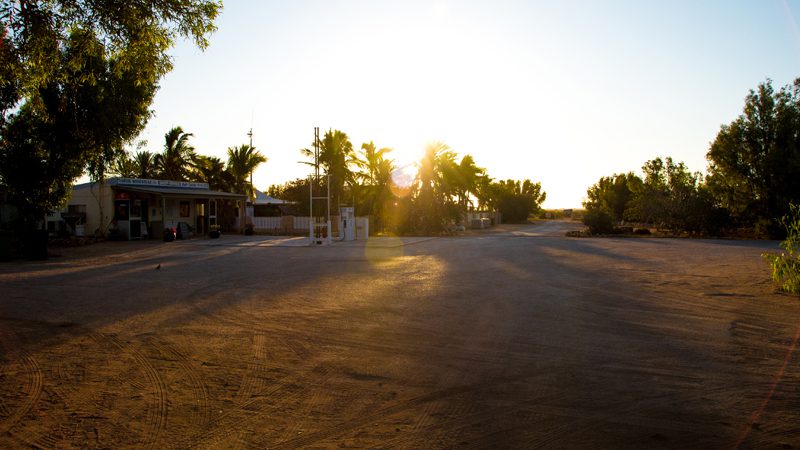 On our last day at the homestead, Marie showed us a wall full of photos that displayed her experiences of whales close up, swimming with manta rays and whale sharks, and helping exhausted green turtles return to the sea. I stood gawping at the photos for ages.

“It’s why I live here, blondie. It’s the best place in the world.”

And I believe her.