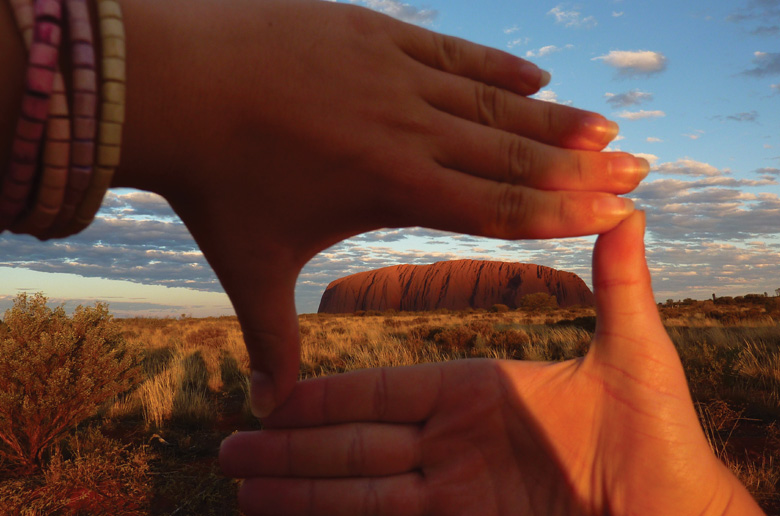 “When I was in grade four, I remember opening a book and it was like, ‘Right, Australian history here we go,” explains David ‘Thommo’ Thomson – an Australian ex-tour leader with 15 years of experience. “The books all said the same thing: ‘The Aborigines had been here for many years, but in 1770, Captain James Cook with his Endeavour, sailed to the east coast of Australia … yadda, yadda, yadda’. And that’s it. The history starts from when the boats got here.”

Thommo, who now works as Brand Leader for Adventure Tours Australia (ATA), is talking about Uluru from his desk at Intrepid HQ. More specifically, he’s talking about why it’s important for Australians and international travellers alike to visit Uluru.

He’s an animated bloke, and you’d be hard pressed to find a guy who gives more of a damn about his country, and the cultures and history that have led it up to this point, than Thommo.

Born, raised and currently living in Melbourne, the 42-year-old led tours at Uluru-Kata Tjuta National Park for five years, so it’s a topic he’s rather passionate about. “The cultures have been swept under the carpet and shrouded in European history,” he says boldly.“The outback is part of the Australian identity. And Aboriginal history is part of the Australian identity too. So visiting Uluru and meeting the traditional owners is a pretty powerful experience – and one I think every Australian should have.”

The laws of the land

The Anangu people have resided at Uluru and the surrounding lands for nearly 30,000 years. Over this time, they formed ‘Tjukurpa’ – their law and creation stories – which are used to make sense of the natural, spiritual and physical worlds to this day.

These stories all contain a strong moral, such as the story of Lungata the Bluetongue Lizard, which reinforces the idea that one should always share. Not a bad one to tell the kids, if you ask us.

“…a perfect starting point for Australians, and visitors to Australia, is to simply visit Uluru.”

The Anangu culture recognises that maturity doesn’t necessarily come with age. In any given situation, you’ve got to prove that you know 100% of what’s required, not just 70% (like for an Australian driving license) – because if you treat a plant, a fresh kill or another source of sustenance the wrong way, you won’t survive. “You’ve got to get it all right,” says Thommo. “I think modern societies could learn a lot from that, and a perfect starting point for Australians, and visitors to Australia, is to simply visit Uluru.”

The provider of life

Situated in the middle of the undulating, semi-arid sand dunes and protruding at a height of 348m, Uluru’s significance is borne from the fact that the rock was (and remains) a source of nourishment for the Anangu people and other neighboring indigenous groups.

“30,000 years of trial and error meant the Aborigines became pretty handy with knowing what’s what with regards to native plant and wildlife”

When it rains at Uluru, water gathers on top of the rock and funnels down the side to its base, into very concentrated regions. It permeates the soft red sand and ensures a constant supply of water, unless there’s a severe drought. “Because there’s water, you have life.Then you’ve got the plants and the bushtucker – all there at the rock,” explains Thommo. “On top of that, this life attracts animals. So not only is it an iconic landmark – it’s a giver of life”

Related: Learn about the history of Uluru from the Anangu people themselves with Adventure Tours Australia

40,000 years of maintaining the balance

Aboriginal people (and many other indigenous peoples from around the world, for that matter) were and are masters of sustainable living. They revered the land and would hunt and forage to sustain themselves – with women generally providing around 80% of food from surrounding plant life – always taking care that they weren’t taking too much. “30,000 years of trial and error meant the Aborigines became pretty handy with knowing what’s what with regards to native plant and wildlife”, says Thommo on the matter.

Aboriginal wisdom, repose and connection to their land was recognized by even Captain Cook. He wrote in 1770 that the Aborigines he encountered “in reality are far more happier than we Europeans. They live in a tranquility that is not disturb’d by the inequality of condition: the earth and sea of their own accord furnishes them with all things necessary for life.

‘They covet not magnificent houses, household stuff… In short they seem’d to set no value upon any thing we gave them, nor would they part with any thing of their own for any one article we could offer them; this in my opinion argues that they think themselves provided with all the necessaries of life and that they have no superfluities.”

Thommo sighs and scratches his head: “I know enough to realize I know bugger-all about aboriginal culture in the grand scheme of things. But I know that on the whole, we’ve got a lot left to learn about it.”

Want to learn more about Uluru and the indigenous people of Australia? Visit Uluru with Adventure Tours Australia. We run responsible tours that offers interactive aboriginal experiences, with the opportunity for the Anangu to share their stories in a way that is sustainable and practical. Adventure Tours Australia were also the first tour company to encourage travellers not to climb on the rock out of respect for the traditional owners.